Port Said - The Gate of the Orient. Port Said has not a very savory reputation among travelers, but by virtue of its geographical situation It occupies on important place in the list of the world's ports. People who have penetrated Into the heart of the town declare that it possesses the true atmosphere of the East, and they instinctively press their handkerchiefs to their noses as they recall their experiences there. The Syren & Shipping Illustrated, 29 April 1908. GGA Image ID # 1472155af8

Passenger Lists available from the GG Archives from the Port of Port Said, Egypt. Organized by Date of Departure, Steamship Line, Steamship or Ocean Liner, Class of Passengers, Route, and the Ship's Captain.

Port Said acted as a global city since its establishment and flourished particularly during the nineteenth and the first half of the twentieth century when it was inhabited by various nationalities and religions. Most of them were from Mediterranean countries, and they coexisted in tolerance, forming a cosmopolitan community. 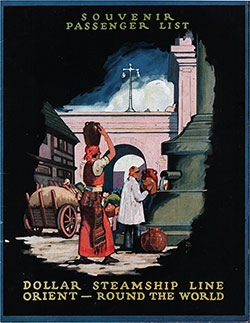