Discover what life was like on board the steamship through historical articles richly illustrated with photographs and illustrations. View our ephemera catalog collections to see all of the memorabilia produced on or for each voyage, ship, or steamship line. Covers the development of the steamship from early steamships, propulsion, food service, oceanic travel, rooms, provisions, meals, the immigrant trade and processing of immigrants on board the ocean liners, passenger comforts, evolution of the steamship and much more. Superb Travel Guide from 1910 Offers general hints on how to adjust oneself to surroundings can prove so useful as on a sea voyage. This book prepares the traveler by informing him how to go, how much it will cost, how to amuse himself, and what to do on arrival at the coveted shore. View the ephemera and history produced by the various steamship lines that offered passenger service to immigrants, tourists, socialites, and others who crossed the vast oceans, dating from the 1800s through the 1950s. Some of the most prized collectibles are ephemeral memorabilia produced on or for each voyage or ship. They include passenger lists, brochures, tickets and voyage contracts, luggage tags, postcards, sports and entertainment programs, and more. The White Star liner Titanic, the largest ship ever built, bound from Liverpool for New York, collided with an iceberg, four hundred miles off the shore of Newfoundland, on the night of April 14th, and about four hours later sank in water two miles deep. Ports of Calls in the United States, Canada and Europe utilized by steamships during the peak immigration era of 1880-1954 including Boston, New York, Antwerp, Fishguard, Hamburg, Liverpool, London, Rotterdam, Southampton, and others. Postcards of Steamships and Ocean Liners

The GG Archives has many high-grade postcards in our Maritime collection. There is quite a variety, including black & white, colorized, photograph, watercolor, and oil paintings. They often capture ships and harbor scenes that otherwise would be lost to time. A number of these are works of art and are suitable for framing. Determining the tonnage of a ship is somewhat complicated, but likely more straightforward than you might expect. We break down this subject into cargo and carrying capacity, gross tonnage, net tonnage, along with a great explanation of deadweight, cargo, gross, net, and displacement tonnage. Biographies of many transatlantic sea captains and commanders from the 1880s through the early 1900s. You’ll find steamship captains from Cunard, White Star, Inman, Guion, Anchor, American, Red Star, CGT French Line, and many others. The crew of a ship are the heart and soul of the ocean liner. Topics covered include employment, organization, stewards, stewardesses, nurses, physicians, and life on board an ocean liner as a member of the crew. Grand collection of vintage ocean liner and other menus covering breakfast, lunch, dinner, farewell dinner, special occasions, and specialty menus that provide an insight into the variety of foods served on the transatlantic steamships and ocean liners and restaurants from the 1800s through the 1950s. Fabulous Collection of Ocean Liner and Travel Brochures from the latter 1800s through the 1950s. Many are not only rare but offer a unique glimpse of passenger accommodations for ocean travel, often profusely illustrated with photographs and other illustrations. Onboard Publications - Newspapers and Magazines

Our collection of newspapers and other onboard publications encompasses a number of steamship lines including Cunard, CGT French Line, Hamburg America Line, and Norddeutscher Lloyd. Provisioning the Steamships and Ocean Liners

Learn about provisioning a transatlantic ocean liner with enough food, supplies, and other stock items for all meals and drinks for thousands of passengers. Everything you ever wanted to know about sanitation, bathing, and facilities on the steamships and ocean liners of the past. You’ll learn about freshwater supplies, Turkish baths, electric baths, plumbing, swimming pools, sinks, toilets, and more. If you’ve ever wondered about stowaways found on the transatlantic ships, answers to many of your questions can be found amongst several articles. There is one reporter’s exposé that is quite a fascinating read on the subject. All the fun and exciting facts and factoids about steamships and ocean liners. Topics covered include night signals, safety, time, ship barbers and barber shops, submarine signaling, aerial mail, classes of ships, guarding gold at sea, and much more.

Ports of Calls in the United States, Canada and Europe utilized by steamships during the peak immigration era of 1880-1954 including Boston, New York, Antwerp, Fishguard, Hamburg, Liverpool, London, Rotterdam, Southampton, and others. 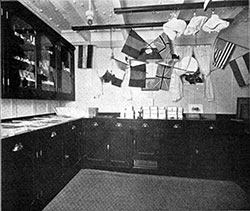 How little shops on board ships plying between European and American ports, became an extremely profitable business well worth the investment to offer their passengers. Shipboard Affairs can be any number of things, from the ship's crew's daily affairs in making the ship a perfect floating hotel for their guests to romantic affairs and other affairs of the heart.

The GG Archives has an extensive collection of these passenger records in our Maritime Collection. Our largest holdings of ship passenger arrival records are for the Cunard Line / Cunard White Star Line.