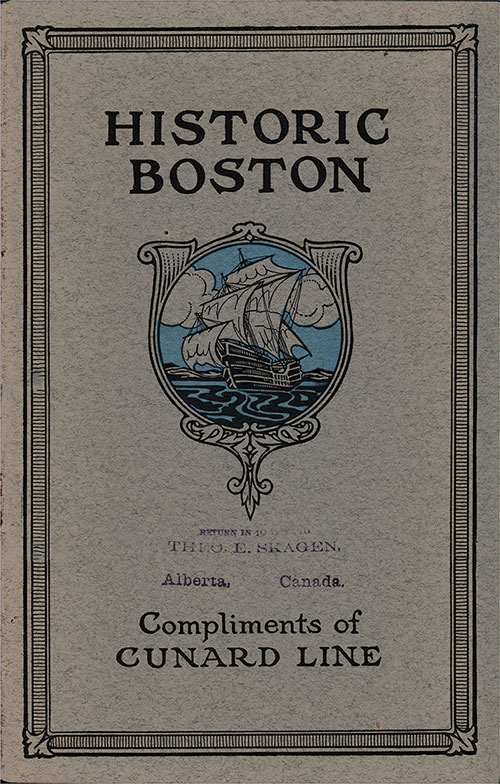 42-Page Brochure from the Cunard Line focused primarily on Boston, Massachusetts, with a brief summary of Cunard Line Fleet and Services to Boston. Some photographs of Cunard ships, offices, docks/piers, Boston Landmarks, and a Railroad advertisement.

HISTORIC BOSTON, first settled in 1630 by the English Puritans, is the Metropolis of New England, the capital of the Commonwealth of Massachusetts, the Second Port in the United States, and a city that has ever been foremost in all that contributed to the intellectual and educational advancement of the Nation. It was in Boston that the Spirit of American Independence was born, and it was in its immediate environs that the war which established that independence was begun. The space at our disposal only permits us to mention briefly the chief points of interest, and the famous men associated with her history.

THE PORT OF BOSTON

Boston Harbor is fourteen miles long and eight miles wide and contains sixty square miles of anchorage. It is considered one of the safest harbors in the world.

With islands dotted about, its scenery is of unusual beauty, and in several of these picturesque spots are concealed formidable fortifications and defen sive works. It was here at Griffin's Wharf that the " Boston Tea Party," on Dec. 16, 1773, threw overboard the cargoes of tea from the three British tea ships. The Cunard Line Piers is situated in East Boston, and are easy of access by car, automobile, or ferry. Boston is an ideal starting point, and terminal for Trans-Atlantic passengers, and by its geographical position has the great advantage of the shorter sea voyage.

Having regard to the old associations of the Cunard Company with Boston, it is interesting to recall that Boston is directly connected with the line's inauguration which, coinciding with the celebration day of American Independence, took place on the Fourth of July, 1840, with the sailing of the Britannia, a steamer of 1,154 tons, 207 feet in length, with a breadth of 34 feet 4 inches, and a speed of 8 1/2 knots. The Britannia arrived in Boston after what was then considered a rapid passage of 14 days 8 hours and met with an unprecedented ovation from the inhabitants. A fascinating incident occurred during February 1844, when the Britannia was icebound in Boston Harbor.

The high appreciation of the service as evidenced by the fact that the merchants of the port liberated her by cutting a canal through the ice, seven miles long and one hundred feet wide, at their own expense.

Since the date of its inception, the Cunard Line has been continuously and prominently associated with Boston, and another epoch in the marine progress of the port was entered upon in 1900, when the Steamers " IVERNIA" and " SAXONIA," with a tonnage of 15,000 tons, were specially built for the Boston trade. A very considerable development occurred in 1911, when the magnificent Steamers "FRANCONIA" and " LACONIA," of 18,200 tons, with a length of 625 feet and a breadth of 72 feet, were added to the service, and the year 1914 heralds further the prosperity, both of the port and the Cunard Line, by the transfer of the "CARONIA" and "CARMANIA" to the Boston Service.

These are vessels of 20,000 tons, with a length of 676 feet, breadth of 72 feet 6 inches, and a speed of 18 knots. Their dimensions make a fascinating comparison with those of the old "BRITANNIA" referred to previously, indicating more eloquently than any mere words the progressiveness of this great shipping organization.

The Boston Service of the Cunard Line is now maintained by the "CARONIA," "CARMANIA," " FRANCONIA," and "LACONIA," making weekly sailings during the summer season. They comprise a group of comparatively new steamers which enjoy a worldwide reputation for their remarkable steadiness, absolute comfort, and luxurious accommodations.

The Public Rooms, which include the Dining Saloon, The Lounge, Drawing Room, Writing Room and Library, and Smoking Room, are beautifully designed, luxuriously furnished, well lighted and ventilated, and are altogether excellently appointed, combining elegance with comfort.

The Verandah Café and the Gymnasium are popular choices. The cuisine and service are unsurpassed, and the à la Carte Dining Service is a feature much appreciated, enabling one to dine to order at any hour.

During luncheon and dinner, a string orchestra of trained musicians renders selections at the pleasure of the passengers. For exercising in the open air, the decks are particularly spacious with extensive promenades, and ample space is provided for deck chairs and games.

The sleeping apartments have been a matter of special consideration, and have been designed to ensure the maximum of comfort and restfulness.

The staterooms are centrally located, spacious, and well ventilated, the decorations tasteful, quiet, and pleasing to the eye. They offer a wide choice to suit all tastes, including many sumptuously-appointed " Cabines de Luxe," and rooms with private baths.

Single-berth rooms are a unique feature. Luxurious baths and toilet apartments are provided, with careful regard for the convenience of arrangement.

The Steamers "ANDANIA" and "ALAUNIA," built in 1913 for the Cunard-Canadian Service, are attached to the CUNARD-BOSTON SERVICE during the winter season.

They are vessels of 13,300 tons, with a length of 540 feet, and carry only One Class of Cabin and Third-Class passengers. All their equipment and appointments are in keeping with the high "Cunard Standard," and they are designed to furnish all the advantages of the high-class liner, providing the maximum of comfort and convenience in ocean travel at intermediate rates.

The "ANDANIA" and "ALAUNIA" maintain the Cunard-Canadian Service in conjunction with the popular Steamers "ASCANIA" and "AUSONIA" of the same class. An additional new steamer, the "AURANIA" (14,000 tons), is in the course of construction for this trade.

The New York Service to Northern Europe includes the leviathans " LUSITANIA," and " MAURETANIA," the fastest vessels in the world, and the magnificent new Steamship "AQUITANIA," Great Britain's largest liner, a description of which is given later.

During the winter season, the Mediterranean Cruising Service, which has gained enormous popularity, is maintained by the Steamers "CARONIA," "FRANCONIA," and "LACONIA" to Madeira, the Riviera, Italy, Egypt, and the Adriatic.

Throughout its vast experience in ship construction and ocean travel, the Cunard Company's prime considerations have been two essential features in the interests of its passengers-Safety and Comfort.

With this continually in view, every well-known appliance and approved method of construction has been incorporated in the design of its vessels, including wireless telegraphy, submarine signaling apparatus, and watertight bulkheads.

The steadiness for which the Cunard Steamers are famous is assisted by bilge keels, and the " AQUITANIA " and " LACONIA " are also fitted with anti-rolling tanks. Enough lifeboats are provided on each steamer to accommodate all on board.

The "AQUITANIA," the latest addition to the Cunard-New York Service, represents the supreme expression in the art of steamship building.

In the most vulnerable parts of the ship, there is that excellent desideratum - a vessel within a vessel. Lifeboats, specially designed and equipped, and motor lifeboats, fitted with wireless telegraphy, are provided to accommodate all on board.

The wireless installation for dispatching and receiving messages over the most extended distances is of the most potent description, while submarine signaling apparatus and other means of signaling are provided for the security and safety of the passengers.