8-Page brochure from the Scandinavian-American Line packs a lot of information and interior photographs of their Tourist Third Cabin accommodations, rates of passage, and other information for passengers. Produced by the New York office for American tourists to Europe.

Scandinavian-American Line, Founded in 1880. Direct Mail and Passenger Service Between New York — Kristiansand, Oslo, Copenhagen, with Frequent Service to and from Canada.

The unqualified success which has been obtained by such Tourist Third Cabin excursions during the past year has prompted the Line to establish this popular service, during the travel season, on our finely equipped fast mail and passenger steamers the SS “United States,“ “Oscar II” and “Hellig Olav,” and the venture has been successful from the start. 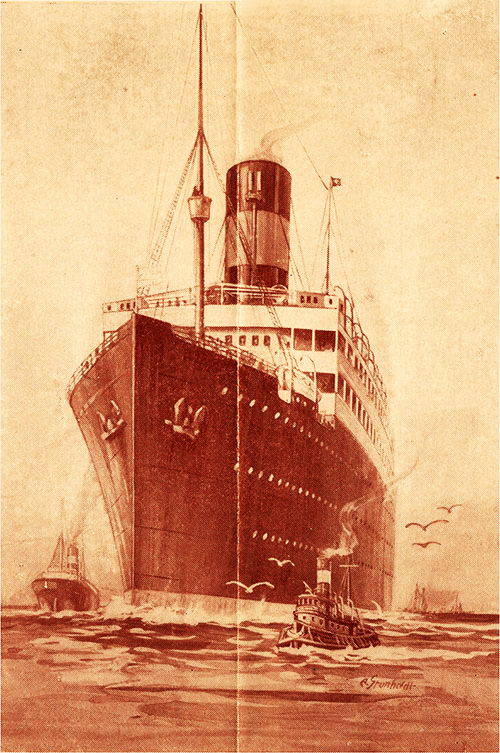 The Tourist Third Cabin enables the Line to offer passengers a higher order of accommodation at a low cost, well within the means of the average American citizen, the vacation tourist, the teacher, and student.

A highly economical European round trip, a restful and refreshing ocean-tour by one of the most picturesque steamship routes in all the world.

If you want to extend your voyage from Copenhagen or Hamburg to Cologne, Amsterdam, Brussels, Paris, Zürich, and other famous Continental tourist cities, they can be quickly and conveniently reached by rail (or airship) from our booking points.

Tourist Third Cabin passengers will find the high standard of service which always has distinguished this highly popular Line. The staterooms are furnished with modern accessories of comfort and convenience.

The dining room, located on the Saloon Deck, and the Smoking Room on the aft Promenade Deck, are spacious and lend additional distinction to the general atmosphere of everyday comfort and ease. The Promenade Deck spaces for recreation and play round out the Tourist Third Cabin attractions of these ships.

Rate Schedule for Tourist Third Cabin on the SS Oscar II, SS Hellig Olav, and the SS United States of the Scandinavian-American Line in effect during 1928. GGA Image ID # 120ac0cdf1

The many liberal Stop Overs offer an exceptional opportunity for visitors to Scandinavia who can tour Denmark, Sweden, and Norway from Copenhagen to Oslo and there connect with our ocean steamer for New York.

Or, if desired, disembark at Oslo and then tour Norway and Sweden to Copenhagen, the Capital of Denmark, and our home port, where they finally embark for the return voyage to New York.

Tourist Third Cabin passengers booked to Hamburg, Germany, have the same choice of routes between Oslo and Copenhagen and, consequently an excellent opportunity to see four of the most exotic lands in Europe en route, and without other extra costs than personal expenses, hotels and meals onshore.

A Picturesque and Convenient Ocean Route

Leaving the Company’s dock at New York harbor the Scandinavian-American Line’s steamers cross the Atlantic in from 6 to 7 days, then passing the Orkney Islands and Scottish Highlands and entering the North Sea, Norway is sighted in the morning of the second day and our steamer enters the harbor of Christiansand, our first port of call.

Then northward through the beautiful Fjord to Oslo, where sufficient time is allowed to permit of a short visit to the beautiful Norwegian Capital and its environs. After an overnight run on the Kattegat, our steamer enters the narrow entrance to the famous Öresound, almost within hailing distance of the Danish city Elsinore and of Helsingborg, Sweden.

The steamer glides under the ramparts of stately Kronborg, famed by Shakespeare’s Hamlet, and soon the Danish Capital’s imposing patina-green towers and spires can be seen. At Copenhagen, our steamer docks near the Royal Yacht Club, on the world-famed, statue studded Langelinie strand promenade.

Bookings Beyond Ports of Call

Arendal, via Christiansand by coast steamer.

Bergen, have the option of being forwarded either via Christiansand by steamer, meals included, or via Oslo by rail via the scenic Oslo-Bergen Railroad.

Larvik, Trondheim, via Oslo by rail.

Arvika, via Oslo by rail.

Gothenburg, have the option of going via Oslo or Copenhagen by rail.

Malmö, by railroad-ferry via Copenhagen.

Danish Booking Points, by rail or coast steamer via Copenhagen.

To Frederikshavn, have the option of being forwarded cither via Copenhagen, or via Christiansand by steamer, meals included.

Finnish Booking Points, have the option of being forwarded either via Oslo by rail to Stockholm and via steamer to Abo or Helsingfors, or via Copenhagen by ship to Finland.

Tourist Third Cabin Passengers booked to Copenhagen, or to Hamburg-Bremen, will be allowed stop-over privilege at Oslo, proceeding thence to Copenhagen either by one of our Company's transatlantic or coastwise steamers, on which accommodations are available or by rail via Gothenburg-Helsingborg, Elsinore.

U. S. Citizens must, in a good season before sailing, provide themselves with a U. S. Passport and also, whenever required, obtain the visa of a Consular Officer of the European Country, or Countries, they intend to visit.

(U.S. Citizens, born in Norway, Sweden or Denmark, do not require a U.S. Passport for entering the country of their birth, but should inquire of our authorized agents for substitute documents, needed for identification purposes).

Alien Passengers, who wish to return to the U. S. from their European visit should, before departure, obtain a U.S. Re-Entry Permit. The application blank and all information regarding the same can be procured from our authorized agents and must be sent to the U. S. Commissioner General of Immigration at least 30 days before departure from the U.S.A.

Passengers in possession of such re-entry permits are not subject to quota-regulations when they return to the U. S. A.

If the re-entry permit is not received in time before sailing, passengers may apply to the American Consul abroad for a Non-Quota visa, providing they have documentary evidence that they are returning resident-aliens.

U.S. Citizens do not require Certificates of Compliance or Sailing Permits.

Alien Passengers do not require a Sailing Permit, if in possession of a Certificate of Compliance, which is obtainable from the Collector of Internal Revenue in charge of their district.

Passengers unable to obtain this Certificate are still required to procure a Sailing Permit at New York before embarkation, and in such cases should have satisfactory proof of their earnings.

Our authorized agents will be pleased to give the traveler full information regarding passports and to assist passengers in executing the applications for permits or other documents necessary for their departure from, and subsequent return to the United States.

A deposit of one-fourth passage money is necessary to secure berths, balance payable upon request but not later than three weeks before sailing.

Berths are not considered engaged unless secured by a deposit or by payment in full. Return reservations can also be achieved by payment of a deposit with balance payable three weeks before sailing from the United States.

When applying for accommodations, eastbound or westbound, either by mail or wire, the name of the steamer, date of sailing, number and sex of passengers, also ages of children, if any, and desired class of accommodations, should be stated.

All Baggage must be plainly marked with the name of the passenger, name of the steamer, date of sailing, destination, and a ticket number.

Steamer Trunks should not be more than thirteen inches in height and of the usual width and length if they are to be placed under the berth or sofa in the stateroom.

Wanted Baggage larger than steamer trunks, if marked with "Wanted" tags, will be placed in the ship's baggage room, where passengers will have access to it, twice daily, in the forenoon and afternoon.

Baggage not required during the voyage should be tagged "Not wanted" and will be stowed in the baggage hold. Tags and Labels are furnished on application.

Register of Baggage: Passengers arriving in New York can, through the representatives of the Baggage Transfer Companies who meet all incoming trains and boats, arrange to have their Baggage transferred to the Scandinavian-American Line Dock.

Passengers should before going on board the steamer, apply to the Baggage Master on the dock and have all Baggage (except hand baggage) registered and a receipt obtained for same.

Baggage Insurance. The Line's liability for Baggage is strictly limited, and it is strongly recommended that passengers insure their Baggage at the Company's offices, whenever practicable, as, in the event of loss or damage to Baggage the Line cannot accept any liability beyond the amount specified on the steamer contract ticket.

It is prohibited by Royal Mandate to import dogs into these countries unless permission has been received in advance from the Department of Agriculture.

Rigid regulations have been issued by the Danish Ministry of Agriculture governing the importation of Dogs into Denmark. Write to the nearest General Agency of the Line for full particulars.

Steamer Chairs and Rugs can be rented upon application to the deck steward on the steamer. The rental is $1.00 for each chair and $1.00 for each rug, for the trip.

Merchandise, Furniture and Household Goods, Pianos, etc., cannot be carried as Baggage but must be shipped as freight.

Automobiles accepted uncrated as excess Baggage when accompanied by a passenger. For rates apply Freight Agents. (Address above).

The photographs here reproduced show some of the attractive accommodations offered Tourist Third Cabin passengers by the Scandinavian-American Line.

The carpeted Staterooms for two, three of four passengers contain comfortable berths, washstands, wardrobes and sofas and are furnished much as are those in the Cabin Class. Located on the Upper Deck, lighted by electricity, steam heated, well ventilated and distinguished by the immaculate cleanliness that characterizes all the ships of this Line throughout, they are inviting retreats for rest and sleep.

Numerous baths and showers. Barber shops and hairdressing shops are located on the Upper Deck and Saloon Deck. The aft part of the Promenade Deck is reserved for the exclusive use of Tourist Third Cabin passengers. These roomy decks afford space for dancing and games, open space and sheltered nooks for deck chairs. Steamer chairs and rugs may be obtained from the deck steward.

On this deck, a high-class ship’s orchestra gives daily concerts at stated hours, with programs of popular and classical music. Further aft on the Promenade Deck is the highly attractive Smoking Saloon, well calculated to attract those who wish to enjoy their after-dinner coffee and quiet social games in friendly surroundings. A well-equipped library of magazines and books is available for Tourist Third Cabin passengers. A physician and trained nurse are in attendance during the voyage. Medicine will also be provided free.

Every steamer is equipped with wireless telegraphy. A ship's newspaper containing the latest world news is published on board ship. This highly attractive Dining Saloon, located on the saloon deck and finished in polished oak, is a well-proportioned room pleasing in design and decorations.

Carefully selected foods and delicacies prepared by skilled Chefs, are served upon dainty china and silver by trained waiters and provide cuisine of the highest order.

In this Tourist III Cabin, travelers will find all the wholesome, perfectly cooked dishes to which they are accustomed at their home family table. The following sample menu, which is selected at random, indicates the hugely varied menus to be expected by Tourist III Cabin Passengers.

Sample Menus and Bill of Fare Sample Menus for All Meals Served During a Day in the Voyage for the Tourist Third Cabin Passengers. GGA Image ID # 120c028037