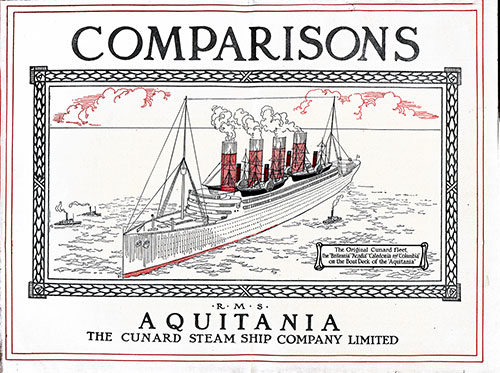 the RMS Aquitania of the Cunard Line made her maiden voyage from Liverpool on 30 May 1914. This brochure was one of many published in 1914 to exalt the size of the ship and accommodations available. Many comparisons were made with well-known US structures of that era.

COMPARISONS are not always odious. Those which appeal to us through sight are frequently the most effective means or conveying information, useful and interesting.

In the following pages will be found pictures of well-known places, buildings, etc., compared with the Aquitania. What can convey the immensity of the largest passenger steamers to the mind better than the picture story of a train like the Twentieth Century upon the deck of the Aquitania alongside of her four funnels? For the time being this beautiful steamer (she has been christened “The Ship Beautiful”) is the longest, the broadest, and the deepest British ship afloat. She is 901 feet long, 97 feet wide, and 92 1/2 feet deep. Her gross tonnage is 46,000.

The Public Rooms include a Restaurant, Grill Room, Drawing Room, Smoke Room, Lounge or Ball Room, Garden Lounges, Historical Gallery of Art, Swimming Bath and Gymnasium. Her designed speed is 23 knots, but she has exceeded 24 1/4 knots in actual service.

She has 21 boilers, each weighing 200 tons, and 168 furnaces. The four funnels measure 22 by 15 feet and reach a height of 164 feet from the bottom of the ship, or 151 feet from the fire grates. There are two motor lifeboats fitted with wireless telegraphy apparatus.

The propellers make 175 revolutions per minute. The electric plant is sufficient to light a town of 200,000 inhabitants and run the car service. A Subway Train, New York City, Could Pass Through One of the Funnels of the Aquitania. GGA Image ID # 1172ac4297 How the Funnels of the RMS Aquitania Would Tower Above the Top of Niagara Falls, If the Ship Were Placed at the Foot of the Falls. GGA Image ID # 1172aed18b

Three of the Largest Municipal Ferries in the World, Placed Across the Length of the Aquitania. GGA Image ID # 1172d37b59 If the RMS Aquitania Were Placed on the Street Car Lines in Copley Square, Boston, Massachusetts. GGA Image ID # 1173cac4cd A Comparison of the RMS Aquitania, Length 901 Feet, and the Tallest Building the World, the Woolworth Building, Height 750 Feet. GGA Image ID # 1173d2293c The RMS Aquitania Placed Against Chicago's Waterfront. The Blackstone Hotel on the Left, and, Auditorium Hotel & Annex in the Center-Right. GGA Image ID # 1174b9ebf9

The Washington Monument Could be Placed Inside the Aquitania. GGA Image ID # 11757294c8

If the Statue of Liberty Were Three Times Its Present Height, It Would Go Inside the Aquitania. GGA Image ID # 11758fca3b

Showing the Relative Dimensions of the T. Eaton & Co., Ltd. Department Store, Winnipeg, Manitoba, the Largest Store in Canada, West of the Great Lakes, and the R. M. S. Aquitania. It Will Be Seen That Even If Good Fortune Still Continues to Smile upon This Great Firm It Must More Than Double Its Present Size to Rival the Aquitania. GGA Image ID # 117598a563 An Eight-Car Train with Locomotive and Tender Could Be Placed on the Upper Deck of the Aquitania Alongside the Four Funnels. GGA Image ID # 11759a0dec The Stateroom on the Britannia in Which Charles Dickens Crossed the Atlantic During January 1842. GGA Image ID # 1175a1dd70 A Comparable Stateroom on the RMS Aquitania in Which Mr. Dickens Might Cross Today. GGA Image ID # 1176550974