Explore the elegance of travel aboard a steamship circa 1900, via of First Cabin Areas of the SS New England of the Dominion Line. View photographs of what the socialites and upper-class tourists would have encountered. 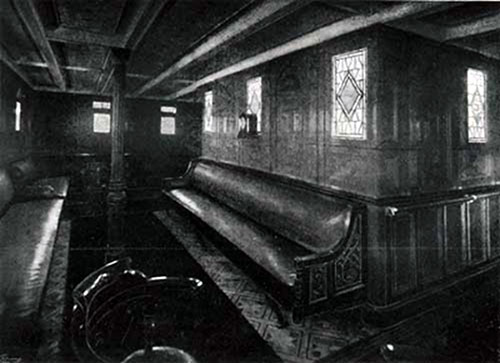 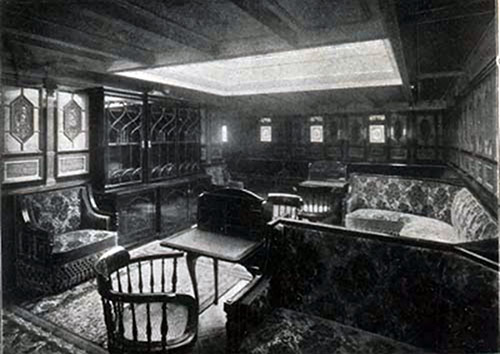 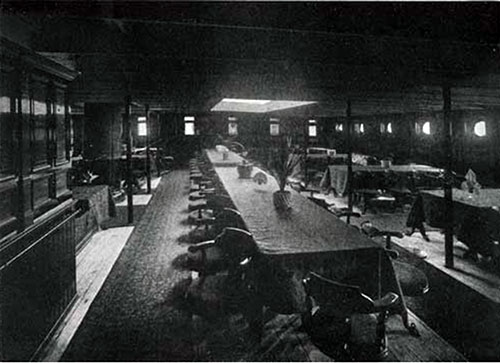 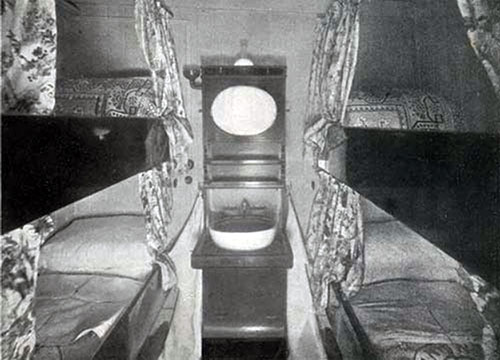 These areas depict what most immigrants would have seen traveling on the Dominion Line circa 1900 as passengers in the Third Class - often called steerage areas of the steamship New England. These Steamers are fitted with Electric Light throughout, have Saloons and State Rooms, Music Rooms, Smoking Rooms and Bath Rooms amidships, where the least motion is felt, are amongst the largest and finest afloat and are well and favorably known for the comfort and excellent arrangements they afford for all classes of Passengers. Passenger Testimonials and Reviews of the Dominion Line Royal Mail Steamers including an Extract from the " LIVERPOOL DAILY POST," July 2nd, 1898. Also includes an Extract from "THEE HERALD," Montreal, May 18th, 1898.

The Dominion Line, whose Steamers ply between Liverpool and Canada and the United States, have just had built a magnificent twin-screw. Steam-ship named the "NEW ENGLAND," by Messrs. Harland & Wolff, of Belfast.

The "New England," which may be described as the latest ocean leviathan, was yesterday lying at the Alexandra Dock, having arrived the previous evening from Belfast. Her funnel could be seen as far as New Ferry, and her large dimensions attracted a considerable number of visitors to the quay alongside to which she has moored the steamer, which has a tonnage of nearly 11,600, is designed to carry a large number of first and second class and also steerage passengers.

A luxurious saloon, with seating accommodation for nearly 200, is situated on the deck-house erected on the hurricane deck, with magnificent state-rooms (containing in several instances brass bedsteads), baths, and lavatories.

The second cabin saloon, which is on the deck below, presents a very handsome appearance. It is capable of seating about 100, and nothing could be better than the sleeping accommodation provided for these passengers, the cabins and berths being conveniently arranged to the saloon.

The steerage rooms are in the starboard alleyways, the accommodation here provided were excellent and up-to-date. The dining room is large and spacious and contains a Piano. There are large and roomy promenades on the steamer for the three classes of passengers.

On the saloon deck, there is a handsome entrance to the saloon, lounge, library, ladies' room, and smoking room. There is also a beautiful ladies' room and a spacious smoking room for the second class passengers on the bridge deck. The furniture and fittings throughout are very choice and substantial.

At one o'clock this afternoon, the guns announced the arrival of the latest acquisition of the Dominion Steamship Line, the " DOMINION." She is one of the finest passenger vessels, if not the finest, which sails to this port.

Passengers on this trip are unanimous in saying that she is one of the steadiest ships they ever sailed on. For the last few years, the shipping of Montreal has been increasing, and the arrival of this steamship is another evidence that the passenger trade of this port is growing, and will continue to do so

A passenger on the new Dominion Line steamer " Canada," speaks of her in terms of unbounded admiration. " There is certainly no ship that I have seen," he said to a " Globe " Reporter, "that can surpass her. She is up to date in every respect; her cabins are the finest I have seen, and she has far and away the best deck room. Although this was her maiden trip and we had three beastly days we beat the record.

The first night out from Liverpool was very rough, almost pitch dark. The next day we had stiff headwinds, and Saturday and Sunday were also very bad. One day she ran 401 knots and another 410, but of course, she can beat this. The Company is deserving of high praise for their enterprise in this matter, and I understand on pretty good authority that she is the first of four such boats to be built by them.'

Sir Oliver Mowat, KCMG, Premier of Ontario, when presiding at a Concert held onboard the RMS " Vancouver " during the voyage from Montreal to Liverpool, in aid of the Seamen's Orphanage, paid a glowing tribute to this Steamer. "

We have always heard," said Sir Oliver, "that the ' Vancouver' is the best boat on the route, and from the uniform kindness and attention we have received from the genial and courteous Captain to the most humble servant of the ship, that impression has been fully confirmed."

Mr. H. Corley, M.P., and Attorney-General Longley, M.P., of Nova Scotia, both added their testimony as to the excellency of the Steamer and how the passengers were treated on the "Vancouver."

An old Traveller—writing on board the Steamer to the Editor of the Morning Chronicle—said "The 'Labrador' is not only a fast steamer but one of the most comfortable vessels I ever crossed in—exceptional, large, airy staterooms—without doubt surpassing that of any other steamship sailing from our ports."

Lord Aberdeen, when responding to the toast proposed by the Lord Mayor at the Banquet given at the Liverpool Town Hall, on Tuesday, November 22nd, 1898, in honor of Lord and Lady Aberdeen's return from Canada, said:—" We have arrived here under the most pleasant circumstances.

We had a voyage on the good ship ' Labrador,' of a most pleasant and satisfactory kind; in fact, I do not think anyone could wish to be better housed, if I may say so, than we were on that vessel, securing the highest amount of safety, comfort, and convenience for the time being."

We, the undersigned passengers by the R. MS " Scotsman " on her voyage from Halifax (which port she left February 1st, 1896) to Liverpool, cannot allow the opportunity to pass without testifying to the superior qualities of the ship, its officers and all who contributed to our safety and comfort, particularly to the Chief Steward, for to him next to the Captain, are we indebted for that which is so large a measure makes up the comfort of an Ocean Voyage, " a good table "; with one voice we desire to testify to the quality provided and served. We do not exaggerate when we say that it has not been our good fortune to fare better on any ship, and some of us bear testimony from experience covering yearly voyages of the last twenty years. Signed by Saloon Passengers.