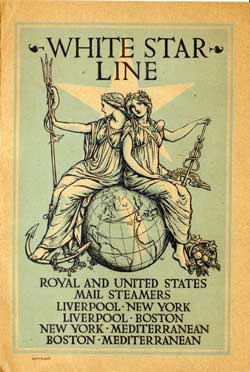 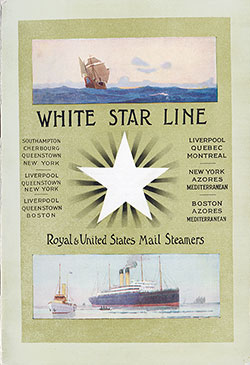 This powerful twin screw steamer is prominent in the Boston - Queenstown Liverpool Service of the White Star Line. Of 13,096 tons burden, her length, 600 feet, and great beam, 64 feet, entitle the Cymric to the consideration of the intending voyager who is thereby assured of a steady trip, practically free from the dread mal-de-mer.

The Cymric is equipped mainly to cater to first- and third-class passengers. No provision is being made for passengers in second class on this vessel. Under this arrangement, the promenade spaces for both classes are correspondingly large, and the cabins for passengers will be found very attractive and equipped with the most comfortable style of berths.

The first-class passengers have apportioned to them a vast promenade deck space, an especially prominent feature of the Cymric; and, with the care and courtesy shown passengers (as on all other White Star Line ships), no one who has sailed on this steamer can speak but in her praise.

The "Cymric" is an excellent example of a modern cargo steamer. Her measurement capacity is about 19,400 tons, and her dead-weight capacity is about 12,000 tons, excluding coal. Her cargo space is divided into seven holds, each of which is divided into three compartments: 'tween decks, orlops, and lower hold. Five chambers are fitted as refrigerators, with a total capacity of about 2,200 tons. There are nine hatchways, 15 derricks, 17 steam winches for cargo purposes, and mast-head "spans." The capability of these appliances is illustrated by the fact that she commenced discharging a full cargo at 7 a.m. on Monday, completed her loading of freight and took on board 1,600 tons of coal, and undocked at noon on the following Friday. Loading and unloading were carried on to a great extent concurrently. About 400 to 450 men were employed, and the average rate of discharge was not less than 300 tons (weight) per hour, the corresponding rate of loading being about 250 tons. All the general cargo, apart from bulk grain, etc., was weighed at landing. When it is remembered that there may be 30,000 to 40,000 packages to be dealt with in such a general cargo, these results are evidence of excellent mechanical arrangements and perfect organization.