The largest vessel launched during 1923 was the passenger and fruit steamer Avoceta of 3,445 tons and 2,500 I.H.P., built by the Caledon Company, Dundee, for the Yeoward Line, Liverpool. The Avoceta is the seventh vessel built by the same firm for the same owners within a period of 12 years. 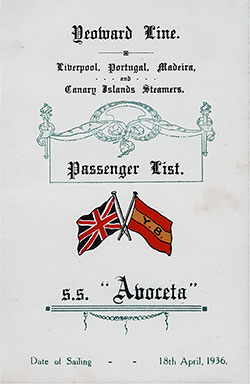 Passenger and fruit-carrying steamer Avoceta; 330 ft. by 44 ft. molded, by 21ft. 6 in. molded to the upper deck. The seventh vessel built by the Caledon Company to the order of the Yeoward Line, Liverpool. It is intended to trade between Liverpool and the Canary Islands. The ship has a complete shelter, upper and main decks, with promenade and boat decks amidships. Accommodation is provided on the upper, shelter, and promenade decks for 120 first-class passengers. A dining saloon, extending the full breadth of the vessel, is situated on the upper deck, and a ladies' room, smoking room, and library are on the shelter and promenade decks. The triple-expansion engines, constructed by the shipbuilders, take steam from three single-ended boilers working under Howden's forced draught system. They launched from the Caledon Yard on 21st September 1922.

"Launches and Trial Trips," in The Shipbuilder: The Journal of The Shipbuilding, Marine Engineering, and Allied Industries, Vol. XXVII, No. 146, October 1922, pp. 216-217