The ROYAL MAIL STEAMERS of The UNION-CASTLE MAIL STEAMSHIP CO., Ltd., Sail from Southampton every Saturday Passengers and Cargo, for Cape Colony and Natal, calling at Madeira.

INTERMEDIATE STEAMERS are dispatched from London every Friday and sail from Southampton every Saturday for Cape Colony, Natal, and Delagoa Bay calling alternately at Las Palmas and Tenerife. These Steamers call at St Helena every four weeks.

EXTRA STEAMERS are dispatched at frequent and regular Intervals for Cape Colony Natal, Delagoa Bay, and Beira and Mauritius alternately. These Steamers call at Las Palmas or Tenerife.

All Union-Castle Line Passenger Lists available at the Gjenvick-Gjønvik Archives have been transcribed and uploaded. Visit our Union-Castle Line Maritime Collection for Brochures and Other Historical Documents.

Passenger Lists of the Union-Castle Line 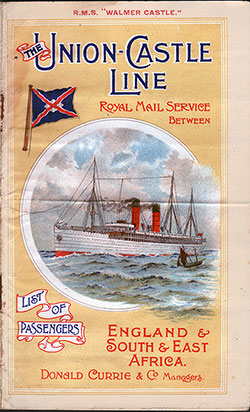 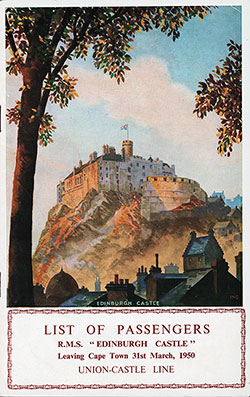