All Digitized Ephemera for the SS Chicago available at the GG Archives. Common items of ephemera in our maritime collection include passenger lists, brochures, event and entertainment programs, and other memorabilia produced for a voyage or ship. 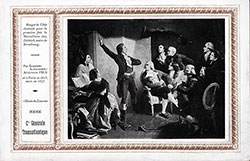 Third Class Passage contract for a 38 year old Italian immigrant from Aoste, Italy for a voyage to the United States in October 1910 on the SS Chicago of the CGT French Line. The contract was written by a Swiss Agency (Zwilchenbart) and is entirely in French with an English translation following each part.