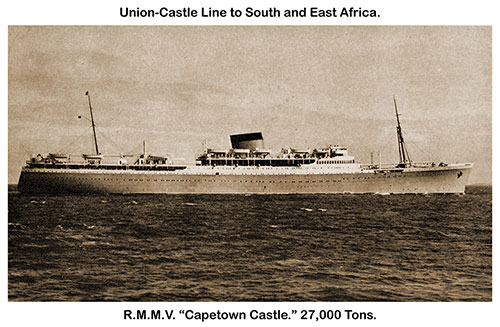 Built by Harland & Wolff, Ltd., Belfast, Ireland. Tonnage: 27,002. Dimensions: 702' x 82' (734' o.l.). Twin-screw, 20 knots. Motorship. Two masts and one funnel. Launched: September 1937. Note: The longest motorship in the world. Service: Southampton-South Africa. Passengers: 243 first, 553 tourist. WW2 Service: After the outbreak of World War II, in January 1940, the government introduced the Liner Requisition Scheme, and Capetown Castle was taken up for conversion into a troop ship. In 1943 she took part in Operation Bolero, the build-up of troops in preparation for D-Day. She was eventually returned to her owners in 1946, having sailed 484,000 miles and carried over 164,000 troops. Post War Service: The ship was refurbished at Belfast and returned to commercial service on 9 January 1947. Fate: She was sold for scrap and left Southampton on 19 September 1967 for La Spezia, arriving on 26 September 1967 for breaking up by Terrestre Marittima.

Ephemera for the RMMV Capetown Castle available at the GG Archives includes a passenger list, postcard, and history of the ship.