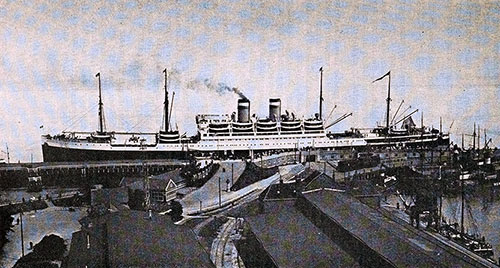 The port of Cuxhaven, which lies on the south bank at the mouth of the Elbe about 64 miles below Hamburg, comprises a considerable part of the Ritzebuettel district, a detached part of the Free State of Hamburg.

It is not equipped for handling, nor does it handle, overseas commerce to any great extent, but is utilized principally as a depot for overseas passengers and as a center for the fish industry. It is also used as a harbor of refuge, and as a pilot, signaling, and quarantine station.

Although the port is very old, it was not used until comparatively recently for anything but a harbor of refuge. The Ritzbuettel district was obtained by Hamburg in 1394, but no effort was made to develop a port there until a plan was evolved to utilize Cuxhaven as an embarkation and disembarkation point for overseas passengers and as a base for the deep-sea fishing industry in the North Sea.

The principal obstacles to be overcome in the creation of a harbor for ocean ships were the encroachment of the Elbe and the sea and the silting of dredged areas. The latter is still a serious problem, as the river deposits as much as 10 feet of silt per annum, despite the fact that an extensive system of dikes and retaining walls has been constructed.

The harbor now has a total water area of 151 acres, of which. 147 acres are available for ocean vessels. The total quayage in the port amounts to about 14,245 linear feet, of which 12,275 feet have sufficient depth alongside to accommodate ocean vessels. Most of the water area is included within three basins, viz, the Amerikahafen or Neuehafen, the Fischereihafen, and the Altehafen.

The Amerikahafen in its entirety and parts of the Fischereihafen and Altehafen have been designated as a free zone, the total area of which is about 130 acres with approximately 8,807 linear feet of quayage and mooring berths.

The largest basin in the port is the Amerikahafen, which contains about 100 acres. It was constructed to accommodate the largest passenger ships in the Hamburg trade and had been deepened to 40 feet at low water, but owing to the war it was never used for this purpose.

The present depths in this basin, due to silting, range from 15 to 24 feet at low water. No attempt has been made to reestablish the 40-foot depth, as it was found that large ships could be berthed at Glueckstadt with as much safety and at much less cost.

At present this basin is used as a refuge by small craft, fishing vessels, and salvaged ships. The Lentz quay, which forms its northern side, is equipped with five 3-ton electrically operated cranes, but these are used only in connection with salvaging operations, as little cargo is handled in the port.

The Fischereihafen, or "fishery harbor," which is the busiest portion of the port, is about 3,200 feet long and ranges from 160 to 500 feet in width. Six fish sheds used for unloading and handling of fish have been constructed on the south bank.

These sheds, with the exception of shed No. 3, are 500 feet long and 65 feet wide. All are 2-storied, the ground floors containing packing and refrigerating rooms while the second floors are used for offices and storage.

Behind these sheds are three auction halls, one hall for every two sheds, where the catches are auctioned off. The quays of the basin are of concrete and ships of 20 feet draft can be berthed at them. Mechanical equipment on the Fischereihafen consists of one 3-ton crane on the south bank and 17 electric winches.

The only other basin of any importance is the Altehafen, in which the depth is about 13 feet at low water. It is used for the general accommodation of vessels.

Overseas passenger steamers discharging or receiving passengers at Cuxhaven berth at the Landungshöft, or "landing stage." This facility is more than 1,200 feet long and is situated on the Elbe on the point of land separating the Amerikahafen and the Fischereihafen.

Immediately behind it are the customs examination halls and the new railway station with which it is connected by means of covered gangways.

The tidal range at Cuxhaven is somewhat greater than at Hamburg, the normal range being 9 feet 6inches. The greatest variation recorded was 27 feet 6 inches. Weather conditions are about the same as at Hamburg, although the weather at the mouth of the Elbe, due to its propinquity to the North Sea, is not as changeable.

Being a part of the Free State of Hamburg, the harbor is under the jurisdiction of the committee for trade, shipping, and industry, with the exception of the Fischereihafen, which is managed by the Fischmarkt G. m. b. H., a firm founded to handle the marketing of fish, the stock of which is owned entirely by the State of Hamburg. All harbor dues and regulations in force at Hamburg are also applicable at Cuxhaven.

The only company in the port capable of supplying bunker coal is the Westfälische Kohlenkontor, which can furnish amounts up to 1,000 tons. The premises of this company are on the Lenzkai, where vessels up to 5,000 tons can be berthed.

No facilities are available for docking seagoing ships aside from fishing trawlers. Bugsier, Reederei & Bergungs A. G. maintain a salvage station and two salvage tugs at the port.

The larger of these is the Seefalke, a vessel of 570 gross tons, equipped with oil engines capable of developing 4,200 horsepower. This craft is the most modern of the extensive fleet of this company and is fitted with modern
appliances.

Cuxhaven's commerce, aside from receipts and shipments of fish, is negligible. During 1927 the receipts from Hamburg and smaller ports on the Elbe below Hamburg totaled 27,322 tons, of which 10,341 tons were general merchandise and 16,981 bulk cargo.

This tonnage was entirely for local consumption. Receipts of fish during the same year amounted to over 43,000 tons, while the number of overseas passengers arriving and departing was 22,696 and 34,615, respectively.

"The Port of Cuxhaven," in the United States Department of Commerce and United States Shipping Board, The Port of Hamburg Including the Ports of Altona and Cuxhaven, Foreign Port Series No. 1. Washington: US Government Printing Office, 1930, p. 306-308.