The First Cabin Service maintained by the Fabre Line between New York and Providence and the Azores and Lisbon, and the Mediterranean ports, Algiers, Naples, Villefranche (port of Nice, Riviera) and Marseilles is, without doubt, the most unique and attractive afforded by any regular Mediterranean Line.

The steamships that comprise the present express passenger fleet have all been constructed since 1902 with particular regard to the requirements of Mediterranean travel are all staunch, trim and fast, and equipped with all modern safeguards. 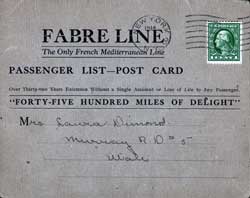 History of the Fabre Line

Fabre Line, inaugurated in 1881, is the oldest steamship line in the Mediterranean Trade. Our safety record has been exemplary, as we have not had a single loss of life or injury to any passenger due to accidents of the sea, the Company's steamers, or the officers in charge.

The success and present popularity of the Fabre Line has been due entirely to the service provided towards its patrons at all times. The high standing attained has been realized because of the actual quality and merit of services rendered.

Testimonials from satisfied patrons have been the only advertisement for the Fabre Line for many years. Their testimate of their pleasant experiences on the Company's steamers have been spread by word-of-mouth to their friends.

It has always been a constant endeavor of the Fabre Line to give its new patrons the same impressions received by their friends. In return, we have received high praise from our passengers.

All servants of the Company are well trained with implicit instructions on providing the highest level of service, both aboard and ashore, striving to give their best efforts towards perfection.

The administration feels that its efforts have been highly successful, with its rapidly growing popularity proves its modern ideas have been understood and appreciated.