Founded in 1840 by Thomas Wilson Sons & Co. The British shipping company expanded and operated a fleet of 52 ships in 1873. The company was incorporated in 1891 as Thomas Wilson Sons & Co Ltd before being acquired by the Ellerman Lines Ltd, shipowners, Glasgow, Scotland, in 1916. Even though the Ellerman group acquired the company, it continued to be run independently of the group and was generally known as Ellerman’s Wilson Line. Founded in the early years of the nineteenth century, the Wilson Line became the largest privately owned steamship fleet in the world. Based in Hull, its main trade was carrying passengers and cargo to and from Scandinavia and the Baltic States although the Wilson Line also carried cargoes to the USA, the Mediterranean and India. 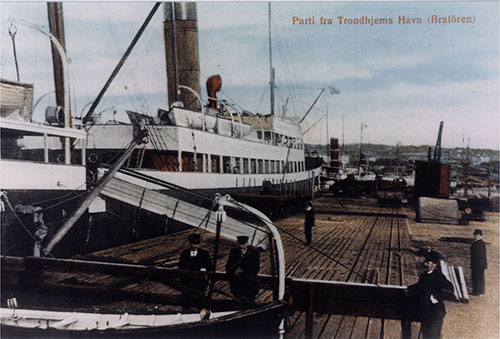 Parti fra Trondhjems Havn (Bratören) | Party from Trondhjems Harbor (Bratören). The SS Aaro of the Wilson Line of Hul at the harbor in Trondhjem circa 1910. GGA Image ID # 129a89efbe History of the Wilson Line of Hull

Wilson Line. - Thomas Wilson, Sons & Co. is at the present time the largest private ship-owning company in the world. This line traces its origin as far back as 1835. It was founded by Mr. Thomas Wilson in conjunction with Messrs Hudson and Beckington, and on the retirement of the two last-named gentlemen, it acquired its present title.

Early in the 1840s the firm was running three steamships to Gothenburg and was mainly engaged in the iron trade, importing large quantities of Swedish and Russian iron, and running a regular line of sailing boats to Swedish ports. It also despatched a regular service to Dunkirk. Steamships gradually superseded the sailing vessels, and new steamers year by year were placed on the Scandinavian service.

About this time the firm secured the mail contract between England and Sweden, which it still holds. After the Crimean War, it started the St Petersburg, Stettin and Riga trade. During the Franco-German War, the business to Stettin had to be suspended; and as a set-off, the service to Trieste was inaugurated, which has developed into an independent Adriatic and Sicilian service.

The Norwegian trade was then improved by the despatch of steamships to Bergen, Stavanger, and Trondhjem, and subsequently, a service of large steamers began running to Constantinople and the Black Sea. After the opening of the Suez Canal the trade to India, which has since assumed such considerable proportions, was inaugurated.

In 1875 the firm launched out into a more hardy enterprise, by commencing to run steamers to America. Its vessels in 1902 ran to New York regularly from Hull and the Tyne ports. The original Calcutta trade was discontinued when the New York line was started, but in 1883 a service was established between Hull and Bombay. In 1891 the firm became a private limited company and in 1894 took over the coasting trade between Hull and Newcastle.

The company employs many large and swift ships in the Norwegian passenger traffic, which in the summer season now reaches very considerable proportions. It has frequent services of passenger and cargo vessels to the ports of northern Europe, carrying passengers in the season as far north as the North Cape. Of course, the winter season necessitates considerable variation of summer services to Baltic ports.

In 1903 the fleet of the old established Hull firm of Messrs Bailey & Leetham was absorbed and in 1908 that of the North-Eastern Railway Company. There are also steamers leaving Grimsby, Manchester, and Liverpool regularly for Scandinavian and Baltic ports; weekly services to Ghent, Liverpool and Newcastle; and services to Mediterranean and Black Sea ports. Besides the New York line, there are ocean services to Boston, to New Orleans and the River Plate.

There is also a weekly service to and from London and Boston in conjunction with the Furness-Leyland Line.

With the inauguration of the Ellerman's Wilson Line, Ltd., the Pacific Coast will have a new service to Hull, Leith, the east coast of England and Continental ports, Havre to Hamburg, via Havre, Antwerp, Rotterdam, Hamburg.

This line will also serve the following ports for transshipment at Hull, by their own steamers:

It will also serve, via Hull, Oporto, Lisbon, Levant porta. In other words, the new line will be in a position to issue through bills of lading to practically any port in continental Europe and the Levant. - Shipping Magazine, Vol. XIV, No,. 10, 25 November 1921, p. 36.