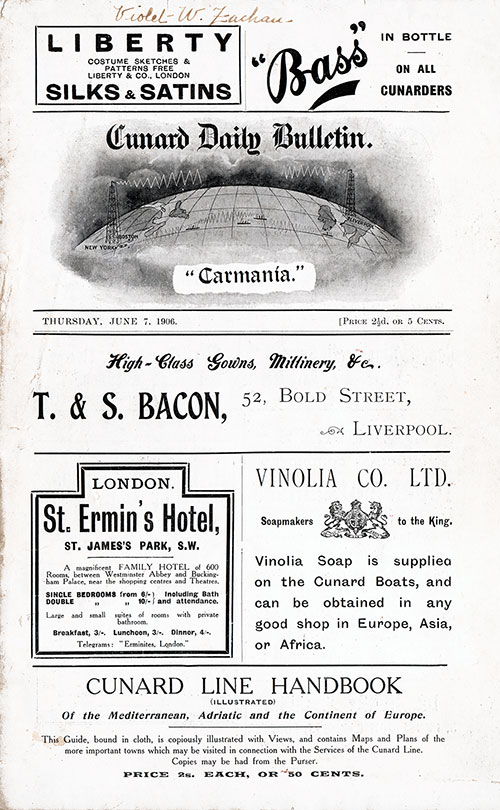 MARCONIGRAMS DIRECT TO THE SHIP

THE NEXT GENERAL ELECTION

SURPRISING STATEMENT
Birmingham, Eng. - Joseph Chamberlain, addressing a meeting of Unionists, asked them to be prepared for a general election soon. He said that in his opinion it would perhaps take place next spring.

RUSSIAN FLEET TO VISIT ENGLAND
London - The Chronicle says that the Russian squadron will make a return visit to Portsmouth in August or September next.

ARCTIC WEATHER IN GERMANY
Berlin - Frosts prevail throughout the middle of Germany. Temperature ranges from two to six degrees below freezing. Fruits and vegetables are injured by the cold weather, which is almost unprecedented for the month of June. The unseasonable temperature is causing much discomfort and sickness.

THE CANFIELD TRIAL
New York - The District Attorney has won in the suits against Richard Canfield.

HEIR TO MILLIONS ENDS LIFE
Pittsburg - Thomas O’Connor, one of the heads of the Jones-Laughlin Steel Co., and heir to fifty millions of dollars, has committed suicide.

THE INSURANCE INVESTIGATIONS
New York - Congressman Babcock has been summoned to appear before the Insurance Grand Jury. It is believed he will give information of Campaign contributions made by the Mutual Life. It is reported that two or three indictments will probably lie found.

THE "YELLOW DOG ” FUND
New York - The officials of the Mutual Life say that Gillett is at work accounting for the 10,000 dollars.

FIRE AND EXPLOSION
New York - A serious fire has occurred on the premises of the Boston Dyeing Co. During the blaze an explosion among the chemicals took place, killing two workmen and injuring eleven.

THE RUSSIAN REVOLUTIONARY MEASURES
St. Petersburg - The Central Committee of Social Revolutionists announce that terrorism will be temporarily abandoned, pending preparations for a speedy armed revolt.

THE CROWN PRINCESS OF GERMANY
Berlin - The accouchement of the Crown Princess Frederick William is expected daily. Prayers in the churches on her behalf continue.

BY WIRELESS
Wednesday. 10 a.m. - From Majestic, White Star Line, Liverpool for New York: “Had light to moderate variable winds throughout.”

TO SALOON PASSENGERS
Dinner will be served at 7 p.m.  - Passengers wishing to dine at 8 p.m. can do so by arranging with the Second Steward before noon.

LONDON ANNOUNCEMENTS
One of the great features of the London season is the refined taste and exclusiveness which characterizes the charming Gowns, Coats, and Millinery at Peter Robinson’s Renowned Regent Street House. 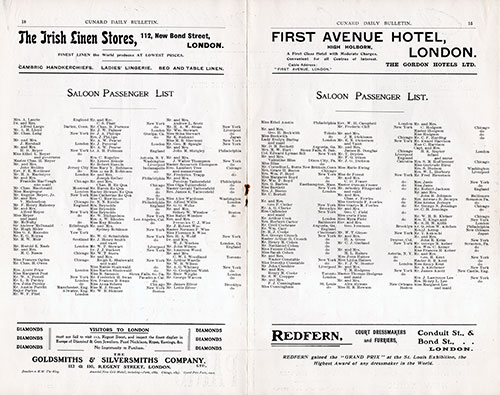