Built by Blohm & Voss, Hamburg, Germany. Tonnage: 49,746. Dimensions: 890' x 102" (936' o.l.). Quadruple screw, 28 knots. Steam turbines. Two masts and two funnels. Launched in August 1928. From keel to top of masts 236 feet. Funnels measured 50' x 21'. Cost $20,000,000 to build. At one time carried an airplane that was launched from the ship by a catapult. Maiden voyage: Bremen-Southampton-New York, March 19, 1930. A serious fire had delayed her completion for about a year. She became a trans-Atlantic record breaker, by making the westward passage in 4 days, 17 hours, 6 minutes. Remained tied up in a German harbor throughout World War II. After the war was used as a troopship to bring back soldiers to the United States. The liner was turned over to the French in 1946. Renamed: Liberte (1946). While being reconditioned at Havre for service, she was torn from her moorings during a severe gale in December 1946, and sustained serious dam age when she crashed into the sunken hulk of the former French luxury liner Paris. As a result her hull was ripped open and she sank in the water of the harbor, but was subsequently refloated and reconditioned at great cost. Commenced her maiden voyage as a French liner in August 1950. Note: See Liberte for additional information. Sister ship: Bremen. 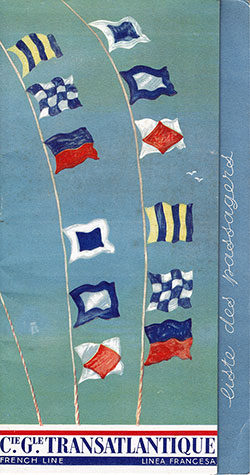