A pilot goes on board the SS Noordam of the Holland-America Line to Steer the Ship when close to Port. 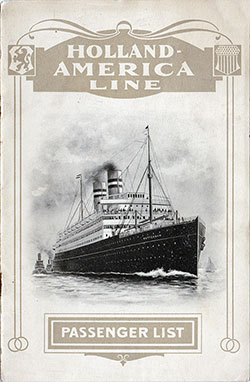 About the SS. Noordam of the Holland-American Line

The machinery has also been constructed in Messrs Harland & Wolff works and consists of two sets of triple-expansion engines embodying the latest improvements. The accommodation has been provided for many first- and second-class passengers. The ship also has the capacity for carrying very large cargo to deal with ample appliances of the most approved character on board.

Electric light is installed throughout, and refrigerating apparatus and chamber» fitted up for the conveyance of fruit, vegetables, etc., for the passengers. Special attention has been given to the decorative work, which, in its general features, closely resembles the sister-ship, the Ryndam, some details of quite a unique character being introduced in these two ships.