In keeping with the general recognition of the need for conservation measures, a group of projects has been included in the WPA program whose objective is that of protecting and developing the national resources as well as preventing, in some measure at least, the destruction and loss so often associated with floods and drought. The need for the latter kind of conservation work has been reemphasized by experiences of the current year.

The work that has been done to alleviate the distress and loss following in the wake of recent floods and drought is noted elsewhere in this section, in the discussion of emergency flood and drought relief.

The WPA has also instituted projects which tend to prevent the recurrence of serious damage. These activities are included within the conservation group in addition to other work equally constructive though less dramatic.

The conservation group of WPA projects constitutes about 5 percent of the entire WPA program and covers a fairly diversified field. Irrigation and water conservation, forestation, erosion control, land utilization, plant, crop, and livestock conservation and similar activities undertaken by WPA work projects all contribute generally to the conservation of natural resources and in many instances are specifically operated as measures for reducing possible future destruction by floods and drought.

In same areas, control of floods and prevention of lose from drought are closely interrelated. Dams built in streams to hold water back during the spring also provide storage basins.

The water may be used later for irrigation or, as is more often the case in the smaller undertakings, it becomes a reserve water supply for cattle and other animals during the dry season.

Such a dam, being constructed on Valentine Blood Creek in Montana, will impound a sufficient reserve supply of water to serve the needs of grating stock on the surrounding range during dry spells.

The effect of this type of dam in maintaining a more normal supply of sub-surface water is also beneficial. Trees and grass are being planted, not only to prevent erosion and excessive run-off during rainy seasons, but also to store up moisture as a reserve against the dry days of summer.

This work is being stressed especially in Wisconsin. In addition to the planting of trees, the work includes cutting dead timber to reduce fire hazards and improving banks of streams and lakes to prevent erosion.

In many regions WPA work serves to complement the terracing of hillsides, the planting of erosion-resisting vegetation, and the making of check-dams in creek beds under the supervision of the Soil Conservation Service and Emergency Conservation Work with funds provided directly to these agencies.

Land reclamation is frequently correlated with flood control work. Near Portland, Oregon, for instance, a valuable farming area recently unused because of inadequate drainage and the ever-present threat of floods, is being reclaimed through the clearing of the Columbia River channel and the construction of a levee along its banks.

Similar stream clearance and levee construction work is being carried on throughout the country. In Pennsylvania, especially, projects are being prosecuted for relocation of channels to prevent flooding of large areas at high-water periods and for construction of masonry walls to confine flood waters within the channels.

In the western States, banks are being rip-rapped to prevent damage to farm property and loss of livestock during floods. The cities of Indianapolis, Indiana; Augusta, Georgia; and Springfield, Ohio; are being provided with greater protection against floods through the construction or strengthening of miles of dikes along the rivers that flow within or adjoining their boundaries.

In addition to this kind of work a miscellaneous group of projects is being operated in various parts of the country for the conservation of plants, crops, and livestock.

Crickets, which menace alfalfa and wheat in Idaho, have been exterminated by the spraying of fields with dust guns. Noxious weeds have been removed in many places. In New Mexico a project has been devised to check the development of tent caterpillars, a menace to forests.

Digger wasps and trachina flies, which are natural enemies of the tent caterpillar, are collected by field workers and propagated in laboratories. The offspring will be released in forests next spring with the expectation that they will greatly reduce the number of tent caterpillars. 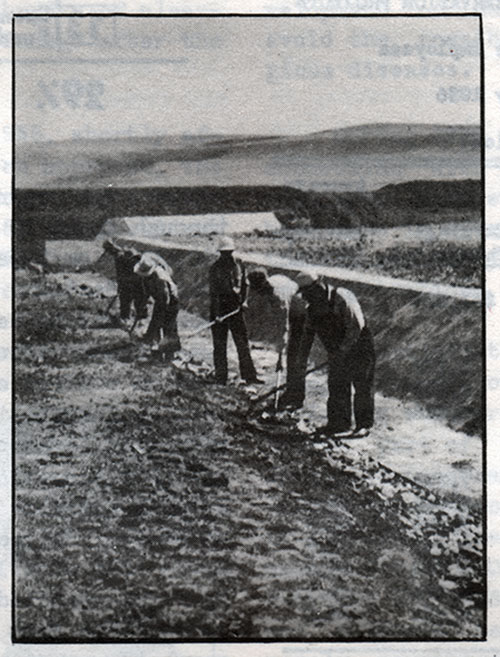 Practically all of the States which have a large proportion of their total program in conservation projects are located in the West and Middle West, where the need for conservation, and control of water resources is greatest.

Washington is spending 17 percent of its funds on conservation work, according to estimates of the value of projects selected for operation through April 15; Idaho and Wisconsin, 16 percent; Colorado, 15 percent; California, 14 percent; and New Mexico, Oregon, and Wyoming, 10 percent.

The bulk of the funds in most of these States is being spent on irrigation and water conservation.

In the early spring of 1936, when the emergency flood relief program was at its height, more than 200,000 workers were listed on payrolls of WPA conservation projects.

Persons previously assigned to other types of projects were transferred to flood relief work during the emergency. Since March, marked reductions have occurred with the result that in July and August approximately 95,000 persons were working on conservation projects.

The number of persons employed increased slightly to a little over 96,000 in the first half of August as indicated in Table 6 in Appendix B. More than two-thirds of this number were at work on irrigation and water conservation projects.

Among the various States, during the first half of August, the largest number of persons, approximately 9,000, were employed on conservation projects in the State of Pennsylvania. California furnished work on this type of project to more than 8,000 persons, and employment on similar projects in Missouri, Ohio, Illinois, and Wisconsin ranged between 5,000 and 8,000.

The total estimated cost of all flood control and other conservation projects selected for operation in the United States through April 15 was slightly more than $77,000,000, or 5 percent of the total for all WPA projects.

Sixty-eight percent of this amount was to be expended on irrigation said water conservation projects, 10 percent for erosion control and land utilization, 4 percent on forestation work, 3 percent for plant; crop, and livestock conservation, and 15 percent for miscellaneous projects some of which are classifiable under more than one of these headings.

Fifteen percent of the total estimated cost of all projects was to be paid for by funds supplied by sponsors. Nearly 71 percent of the cost was to go for direct labor payments, and a little over 29 percent for other purposes.

Funds actually expended for materials, supplies, and equipment on flood control and other conservation projects through August 1936 amounted to approximately $8,500,000, or roughly 4 percent of the total expenditures for these purposes on all WPA projects throughout the country.