US Naval Women's Reserve - The WAVES

Women Accepted for Vounteer Emergency Service or WAVES was part of the United States Naval Reserve during World War II. Established by Congress in July 1942, it authorized the US Navy to accept women into the Naval Reserve as commissioned officers or enlisted personnel.

The GG Archives collection includes books, brochures, and other ephemera on or about the WAVES and women serving in the United States Navy from World War II onwards. Navy—Rear Admiral Randall Jacobs, USN, Chief of the Bureau of Naval Personnel, inspects the new uniforms of the Women's Reserve. Who said Britannia rules the waves? Here are the ones who lead the WAVES of the US. Facts About The WAVES and SPARS

The WAVES is an organization of women who replace Navy men at shore stations. The SPARS is an organization of women whose job is to replace Coast Guard men at shore stations. Discusses where you will serve, how you will live, Pay, and "Navy blue uniforms designed by the famous stylist Mainbocher to flatter every figure." (1943) To every woman who wants a part in winning this war. Never in history have American women been offered such a chance to serve their country. Never has there been such an urgent need for their service. (1943) Story of You In Navy Blue (The WAVES)

The story of you in Navy blue is the story of the thousands of other women who serve their country and their flag as part of the United States Navy. (1944) Lavishly illustrated brochure created in 1945 provides an incredible photographic record of the WAVE activities and life in Washington DC at WAVES Quarters D. The Women Accepted for Volunteer Emergency Service were a "Pass in Review." (1945) A job accomplished, a victory won. As WAVES have accepted their responsibilities as citizens in a nation at war, so may they contribute their efforts to the fullest in building a peaceful world. Good luck and Godspeed. (1945) The May 1946 issue of the WAVES News Letter marks the publication of the thirty-sixth and final issue. Published by the Women's Reserve office in BuPers since April 1943 for the information and interest of all WAVES. May 1946 Final Issue (NAVPERS 15,002) Featuring more than 150 photographs, WAVES offers a different view of World War II. These are not images of men at war; instead, they portray the essential work and efforts of the women at home who made the war's success possible. The Story of WAVES Recruit Training

Public Law 625, passed in June 1948, marked a new era in the history of the armed services. For the first time, women outside the medical services were to become an integral part of the regulars, Army, Air Force, Marines, and Navy. Enlisted Wave college graduates are invited to apply for appointment to the rank of ensign in the line or Supply Corps by BuPers Circ. Ltr. 173-49 (NDB, 15 Oct 1949). 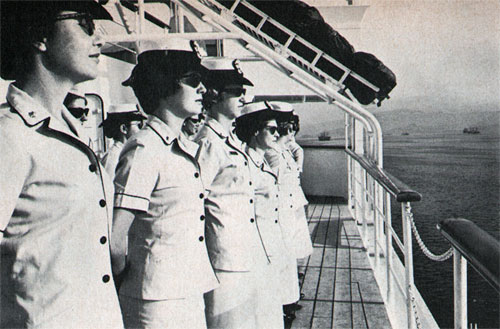 ABOARD U. S. NAVY hospital ship USS Repose (AH 16) there are 19 Navy nurses, most of them volunteers, and for many it is their first trip in a Navy ship. They are looking forward to the travel and excitement that the months ahead' will bring. This 1967 WAVES enlistment brochure provides a transitional phase where the World War II era moves toward full integration into the regular US Navy. The emphasis on fashionable uniforms reflects the period from which this brochure represents. A RECORD 204 women have completed the Navy Relief Society's most recent training course held at the Naval Postgraduate School in Monterey, Calif. This brings the number of qualified workers at the school to 374. U. S. Naval Institute Proceedings, Volume 100/9/859, October 1974. The first woman in any of the armed services to be commissioned a Chaplain, Lieutenant Florence Pohlman, USN, is portrayed in this painting by Margaret Holland Sargent, for the Navy's Combat Art Center in Washington, DC. GGA Image ID # 1d1313087e Welcome to the Navy - Women at Orlando Naval Training Center

This 1978 brochure offers a glimpse of life at the Orlando Naval Training Center in the late 1970s before women were allowed to serve on most ships except for submarines. (1978) Pictorial History of Navy Women 1908 - 1988 - Volume 1. This book is formatted like a yearbook and has hundreds of photos and short bios of women that served in the U.S. Navy through 1988.