Listed below are magazines about the U. S. Navy and / or their activities that represent less than ten issues total at the Gjenvick-Gjønvik Archives. 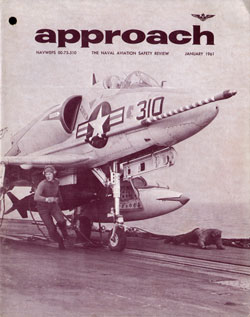 Featured Articles Include: Fuel Computation For Diverting Carrier Aircraft To Landing Fields, Carrier Flight Operational Tips, A Wartime Forecaster Gets a Line on Local Weather From the Natives, and Aircraft Braking Technique. Featured Articles Include: Infrequent Instruments, Penetrating a Thunderstorm, Uncalculated Risk, Routine Night Flop, and Oxygen: It Will and It Won't. Featured articles covered topics including: The new look in aircraft maintenance management and its relation to safety, Unit improvement often hinges on the prevention of haphazard maintenance, and Not asking for outside assistance when disoriented can sometimes be fatal. Articles cover topics including Antarctic weather and field conditions try even seasoned aviators' skills, A look at the USS Forrestal, Air Group EIGHT and its accomplishments, and Are you an aerial lawbreaker? Avert violations; review instructions now. Featured articles covered topics including Aviation's future development depends on ground control, Blind flying by the cat and duck method is highly overrated, and What happens when you unfasten that seat belt underwater? Featured Articles Include: Flying in Turbulence, Maneuvering at Weather, Flight Judgment, Which Way is Down?, Have You Ever, Shared Equipment, Then Came the Light, and FOD is where you find it. An Aviator Poem, adapted from Interceptor is reprinted here. Featured Articles Include Safety and the TACCO, Of Poker Odds and Aviation Safety, Keep Current on Emergency Procedures, Minimum Flying Speed—Minus Ten 16. GxWT. = Caution, What to do Until the Helicopter Comes, and ASO Safety Coloring Book. Featured Articles include The Secret of the Great Lakes Bluejackets' Health, Bluejackets' Stage War Pageant, No Poultices for Potsdam, Most "Cussed" and Discussed Department at Great Lakes, The Battle in This Country, and New Home Comforts for Great Lakes Men.

Navy: The Magazine of Sea Power The January 1963 issue features articles on The Navy and Cuba: Operational Report, Deterrent Strategy and the Oceanic Community, Automation at Sea, Sea Treasures in Bottles, and More. The December 1947 Issue features articles on The Navy on Capitol Hill, The U. S. Frigate Constitution, George Dewey, Admiral of the Fleet, Gold Wings for their Thoughts, USNA Alumni News, and More. The October 2003 issue articles include Christening of USS Virginia, Virginia: Silent Ieader for the 21st Century Navy, On "The Third Battle of the Atlantic," The Ohio Class SSGN, and More. The 4th Quarter 1985 issue articles include "OUR NAVY'S SHIP OF THE QUARTER" USS AUGUSTA SSN710, MIA Report, Navy Awards Fleet & Personnel Awards, Change of Command Around the Fleet, and More.