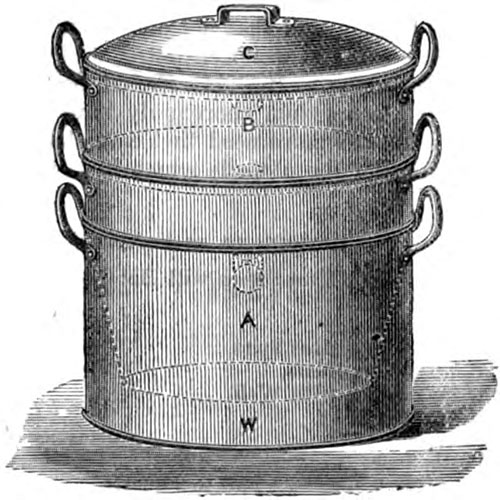 Probably by means of this invention less food is wasted than in any other known methods of cooking.

Warren's cooking pot cooks meat in an almost air-tight chamber, heated by steam. Thus the meat cooking its own vapor.

The Warren's cooking pot (W) is a large oval-shaped pot, into which is fitted an inner case (A), leaving a space into which water is poured.

The lid (C) may now be placed on, and the pot, so far as cooking meat is concerned, is complete. The meat of course is placed in the chamber (A).

The pot is placed on the fire, and the water in (W) kept boiling, the steam of course arising and surrounding the chamber (A), but not entering it. The lid (C) is made double for the purpose of condensing the steam, which runs back into (W).

There is, however, a small hole in the lid (C) in the top, in order to let out the steam in case it should boil too fast.

A good-sized leg of mutton takes about three hours to cook by this means. Shortly before it is done, open the chamber (A), and pour into a basin all the liquor and melted fat that has run out of the leg of mutton owing to the heat, and replace the mutton in (A).

Strain off the fat, which of course, must be kept for dripping, and warm up this liquor (from the condensation of the steam of the mutton, perchance increased by a trifling escape from the steam in the outer chamber) fresh in a small saucepan, and use it as the gravy to pour over the meat when served on a dish.

The portion (B) of the pot is for cooking vegetables, and can be placed on the top of the chamber (A) before the lid is placed on, and the same lid then fits on (B). There is a small tube connecting (B) with (W), so that the steam rises into (B), into which vegetables may be placed, that are thus cooked by steam during the same time that the meat is being cooked in its own vapor in the chamber (A).

For travelers camping out there is probably no invention in the world in relation to cooking as useful as Captain Warren's cooking pot. A few bricks may be collected and ranged round with spaces between, filled with a little coke or coal, and the pot placed on the top. All that is necessary is to keep in the fire, and the meat and vegetables will,  after a time, be as well cooked, and taste as savory, though the fire has been stirred by a soldier's bayonet, as if served up in the, most luxurious Parisian café.

When the pot is not in use, first let it be thoroughly cleansed, and then put by in separate pieces, and not all fitted together.