Her sea trials on May 29 1927, were marred by a freak accident when the order to cast off was given prematurely and only the Captain's brilliant seamanship averted disaster.

The Grand Salon, decorated in red lacquer with touches of gold, was illuminated by lights concealed behind the glass panes of the vast ceiling.

The First Class dining room, with its elegant but temperamental illuminated fountain, was designed by Patout and could seat seven hundred diners simultaneously.

Captain Blancart with a group of passengers on the maiden voyage to New York , June 28 1927. Second from the right is Maurice Chevalier, with his wife and partner, Yvonne Vallée, on the Captain's left.

The seaplane piloted by Lieutenant Demougeot which on August 13, 1928 , carrying mail for the United States, was catapulted from the deck of the Ile when she was four hundred miles from New York, the first ship-to-shore airmail delivery.

The troopship Ile de France carried nearly 400,000 Allied personnel, in safety if not in comfort, all over the world.

Some of the colorful troops transported by the Ile during the war.

The Cabin Class Salon, designed by Le Bûcheron, with a spectacular illuminated staircase of wrought iron and glass.

To the last the Ile lived up to her name of "Rue de la Paix de l'Atlantique."

All Digitized Ephemera for the SS Ile De France available at the GG Archives. Common items of ephemera in our maritime collection include passenger lists, brochures, event and entertainment programs, and other memorabilia produced for a voyage or ship. Program of the Charity Fete to be held on board the SS Ile de France for the benefit of the Several Benevolent Institutions of which the CGT French Line is a patron. 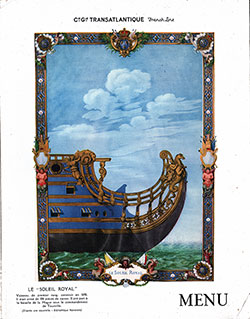 The Normandie, Ile de France, Paris, Champlain and Lafayette combine economy and efficiency in fulfilling the most discriminating requirements. Their Third Class accommodations cannot help but bring you all satisfaction. Illustrated brochure from 1951 provides colorful deck plans for areas occupied by cabin-class passengers and numerous interior and exterior photographs of the SS Ile de France of the CGT French Line.

The 43,153 grt, 792.9-ft., steamship Ile De France was built in 1926 by Chantiers & Ateliers de St. Nazaire for the French Line (Compagnie Générale Transatlantique). When she was launched, she was CGT's biggest ship and the sixth largest in the world.

She sailed on her maiden voyage from Havre to New York via Plymouth on June 22, 1927. In July 1928 she was fitted with a seaplane catapult. On November 8, 1940 she was requisitioned as a troopship by the Royal Navy.

She commenced her first post war commercial voyage on October 22, 1946, but from April 1947 to July 1949 was completely reconditioned and rebuilt to 44,356 tons and funnels reduced to two.

On July 26, 1956 she rescued 750 survivors from the sinking liner Andrea Doria. On November 10, 1958 she started her last voyage from New York to Plymouth and Havre and on February 26, 1959 sailed from Havre for Osaka as the Faransu Maru for scrapping.

In 1959 she was leased at $4,000 a day by a film company and renamed Claridon, amidst protest from the French public, she became the central prop of the film "The Last Voyage". A tense drama with on board explosions and a controlled sinking, later re-floated and scrapped at Osaka.

Immigrant Ships Beginning with "I" & "J"