The Lusitania Story - The Sinking of an Ocean Liner 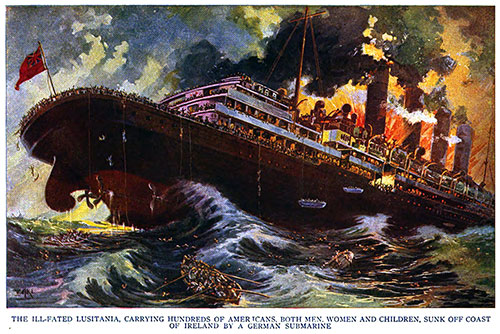 The Ill-Fated Lusitania, Carrying Hundreds of American, Both Men, Women, and Children, Sunk off the Coast of Ireland by German Submarine U-20. Pictorial History of the World's Greatest War, 1919. GGA Image ID # 1854ae5321

The horror of the deadly assault on the Lusitania does not lessen as the disaster's first shock recedes into the past. The world is stunned. It had not taken the German threat at full value; it did not believe that any civilized nation would be so wanton in its lust and passion of war as to count a thousand non-combatant lives a mere unfortunate incidental of the carnage.

Our collection about the SS Lusitania of the Cunard Line includes articles and books about the sinking of the great and luxurious ocean liner by the German U-Boat and the aftermath that caused the US to enter World War I. America Entangled: The Story of the Lusitania - 1917

To sink the Lusitania, the German admiralty had argued, was to lower England's prestige and to hoist the black eagle of the Hohenzollerns above the Union Jack. Loss of the Steamship Lusitania - 1915 The story of the Lusitania's loss is best told in the official report of Lord Mersey, the Wreck Commissioner of Great Britain: Official Report on The Loss of The Lusitania (7 May 1915) The Sinking of the Cunard Line RMS Lusitania - 1918

The Magnificent Cunard Liner Was Torpedoed by a German Submarine, Ten Miles from Kinsale Head on the Irish Coast. May 7, 1915. The Ship Sank in Eighteen Minutes. Because of the number of American lives lost, the standing of the matter in international law, and the vessel's prominence, the Cunard liner Lusitania sinking on 7 May 1915 is of more importance. Dates in History That Provide a Timeline of the Sinking and Aftermath of the RMS Lusitania of the Cunard Line That Killed 1,198 Including 124 Americans.