A deck or steamer chair is absolutely essential to comfort. Applications for steamer chairs should be made to the deck steward, who will issue a receipt for the amount, which is $1.00 for a trans-Atlantic voyage.

Travelers will find it entirely unnecessary to take along their own steamer chairs, which will only prove a source of annoyance and expense.

The very wealthiest travelers no longer carry their own steamer chairs. In the height of the season, it is wise to write for a steamer chair two or three days in advance of sailing, as this will ensure proper attention. The chair should be placed on the windward side of the vessel.

Chairs are paid for when assigned. A deck steward will ask persons to vacate the chairs after they have been rented on request of the passenger renting the same.

At least one heavy woolen steamer rug should be provided for each passenger. These rugs are very apt to become wet with the spray and should be taken to the stateroom at night. They should not, however, be on electric radiators, as this is apt to char them.

In making the eastward trip, the steamer chair should be placed on the south side of the deck in as shady a spot as possible. It is not considered etiquette of the sea to move the position of a steamer chair when once selected.

Be sure your name is placed on the chair in some conspicuous position, either by a tag or otherwise.

A pillow for the steamer chair is a luxury that can be readily provided. It should be supplied with ribbons or tapes so that it can be fastened to the back of the chair. Pillows should be small enough to be used as a headrest.

Other pillows for the bottom of the steamer chair can be provided. They can be readily left in the steamer trunk to await the return travel. First Class Passengers Relaxing on the Promenade Deck With Steamer Chairs Along With Steamer Rugs for Warmth on a White Star Line Ocean Liner Circa 1909. GGA Image ID # 17d5a5b6f4

Tips from Harper’s Guide to Paris

A deck chair is an important article of comfort for the voyage. It is a special chair of straw and wood, used on the deck of the ship, and each person must carry his own. These may be hired from almost any steamship company, at the price of about $1 for the voyage.

They can be purchased at different prices, ranging from $2. If they are purchased, the owner’s name should be printed in large black letters in a conspicuous place, and the chair then sent to the steamship company.

If they are hired, a notification to that effect should be sent to the company some days in advance. Chairs may be stored with the steamship company at the port of arrival in Europe and held there until the return if the return is made on a steamer of the same line.

If not, they may be shipped to the return steamer on notification to the company at the port of arrival. It is advisable to purchase a small head cushion, about twelve inches square, which may be hung over the hack of the chair and adds materially to the comfort of the voyage.

Sears, J. H., Harper’s Guide to Paris and the Exposition of 1900: A Comprehensive Map and Guide to The City of Paris; A Complete Guide to The Exposition; French Phrases Translated; And Maps Diagrams, And Illustrations, London And New York: Harper & Brothers Publishers, 1900: 8-9. First Class Passenger Enjoy the Luxury of Relaxing on a Steamer Chair Covered With a Steamer Rug To Keep Them Warm and Cozy While Being Served Sandwiches by the Steward. GGA Image ID # 1799b7c6d7

Quite as important as the steamer-chair is the steamer-rug, as all Atlantic passages, at any time of year, are likely to include some cold weather, and the rug is pretty sure to be used every day.

It is placed on the chair, and the traveler then reclining upon it wraps it over himself and turns it under his feet in the form of a bag.

These rugs should be of thick woolen cloth, and, though somewhat expensive, they are so constantly used that the owner is well repaid for having purchased one.

They may be carried in a package that includes coats, mackintoshes, and other materials wanted during the voyage. These are usually packed in the steamer trunk and left at the steamship company’s office with the steamer chair, awaiting the time of return.

On some steamers, steamer rugs can be hired from the purser at a charge of $1.00 for the voyage. It is not safe, however, to depend on getting a rug in this way unless the company acknowledges the receipt of the order in advance and states that the rug can be furnished. Rugs are very cheap abroad and make acceptable presents. Silk rugs have little warmth.

They are such robes or rugs as are familiarly used in carriages and automobiles, or steamers, or upon invalid chairs or couches, and are generally known as lap robes, carriage or auto rugs, or as traveling or steamer rugs. They differ in use and character from ordinary bed blankets and are only exceptionally used upon beds in place of these. Since 1859, when the question arose in regard to the classification of traveling rugs as between “blankets” and “manufactures of wool,” the proper classification of these articles has been occasionally the subject of discussion in the Treasury Department.

In 1806 and 1809, the department decided that they should be classified as manufactures of wool not otherwise provided for. A similar decision seems to have been made in 1870.

In 1888 the department decided to modify its previous rulings and to concede that these articles should be classed as rugs, upon the ground that they were such both under the comprehension and the commercial significations of the word.

The only testimony in the record in regard to the commercial designation, and which was given for the purpose of distinguishing the importations from shawls, was from a witness who said that they were always and prior to March 1883, bought and sold by the name of “traveling rugs,” and that he had never heard them called “shawls.” 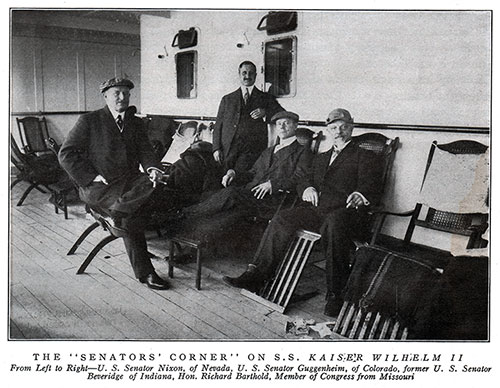 The "Senators' Coner" on the SS Kaiser Wilhelm II of the North German Lloyd. Members of Congress Relax on their Steamer Chairs circa 1911. GGA Image ID # 17d786c798

Lap Robes—Steamer Rugs. Woven woolen spreads of mixed colors, some with fringed ends and some with hound edges, used to cover the legs and bodies in automobiles, on couches, in carriages, at seacoast resorts, and in hospitals and sanitariums, are not dutiable under paragraph 289, tariff act of 1913 as blankets. Their classification as woolen manufactures, paragraph 288, is affirmed.

Sears, J. H., Harper’s Guide to Paris and the Exposition of 1900: A Comprehensive Map and Guide to The City of Paris; A Complete Guide to The Exposition; French Phrases Translated; And Maps Diagrams, And Illustrations, London And New York: Harper & Brothers Publishers, 1900