Inspection of the Ship and Crew Before Sailing - 1908 The Crew Lines Up for Inspection Before the Voyage. GGA Image ID # 147354d8db

When the hedges of the home farm can no longer confine the ambitions of young Giles, and he determines to seek fortune across the seas, he little knows how his decision excites the interest and solicitude of the Board of Trade.

It is probable that young Giles has never heard of the Board of Trade; indeed, his ignorance in that respect is shared by the great majority of seasoned voyagers.

But the Board of Trade knows all about young Giles, and, through its able and indomitable emigration officers, sees that nothing is left undone to bridge the ocean safely and comfortably for him.

To the ordinary observer the fine steamships engaged in the Australian trade leave nothing to be desired in the way of comfort and seaworthiness; to the man of statistical turn of mind, searching investigation reveals the pleasing fact that disasters of any kind are so rare that the safety of the 12,000 miles voyage is beyond question.

The travelling public knows that the owners of the respective lines spare no effort to maintain their high reputation. The Board of Trade inspector knows this too, but with the Australian emigrant on his hands he leaves nothing to chance.

He knows that expenditure as lavish as in the Royal Navy is the rule with the owners of these liners in respect to equipment; that there is a qualified and experienced officer held responsible at all times for the condition of every particle of gear; that there is always the illimitable ocean into which that officer and every sailor in the vessel would most willingly and surely cast anything that is not up to a seaman's high standard of perfection. That, however, is not enough for the Board of Trade surveyor.

He searches into the innermost recesses of the hull; he goes over every detail of the engine-room; and by the time he is satisfied every plate and rivet and crank can be vouched for. He does all that, and more, for the cabin passenger and crew; but in the case of the emigrant there is special and extended vigilance. 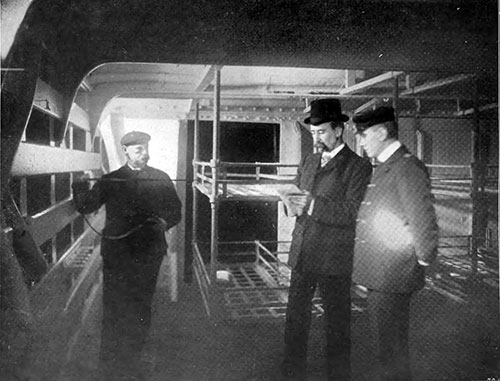 Inspectors from the Board of Trade Examine the Sleeping Accommodations for Steerage Passengers. GGA Image ID # 147366c336

This exceptional care is exercised by the Board of Trade emigration officer and medical officer—-gentlemen of wide powers, who act in concert. Long before the date of departure of the vessel the emigration officer has under review the plans of the space to be allotted to emigrants.

And, with the cordial co-operation of the owners of the vessel, he has matters so arranged that every emigrant will have a sufficiency of room and abundance of light and of air in his sleeping quarters, and in the case of female emigrants adequate privacy.

All the details of stairways, dining-rooms, lavatories, bedding, lifebelts, etc., come within this review. Then there is the matter of food. ln company with representatives of the owners and the responsible officers of the vessel the emigration officer inspects each lot of eatables as it is delivered at the docks, and allows nothing to be placed in the ship's larder unless the quality is up to standard. Inspection of the Ship's Provisions, Including the Mustard. GGA Image ID # 1473b0daae The Ship's Baker and His Work Area is Inspected. GGA Image ID # 1473ccda32

The pork is probed to the utmost chunk. Not even the mustard is taken for granted. And, finally, the ship's baker must place his head in the halter of inspection. When the day of departure arrives, the whole of the ship's company are mustered for inspection by the medical officer, who sees to their physical fitness, and the emigration officer, who sees to their efficiency. Along the entire length of both sides of the promenade deck range men of the bridge, able sailors, stewards, cooks, and all the engineer's staff, while from the stokehold comes an army a hundred strong. The Emigration Officer Mounts to the Boat Deck and Orders Out the Boats. GGA Image ID # 14751b964c

Being sure that every man requisite for the proper working of the vessel is aboard and fit for duty, the emigration officer proceeds to put them through their facings. He mounts to the boat-deck and orders out the boats, noting the readiness and efficiency of the respective crews and every detail of gear and equipment. All the latter he has attended to in earlier inspection. He is sure of the boats—now he wants to be certain that there will be no bungling in a sudden emergency —and he does not rest satisfied until he has seen the boats* crews, in their life-belts, man the oars and row off. Then the lamps engage his attention, and so on through the hundred-and-one details that make for the safety of passengers. The Board of Trade Inspector Proceeds to the Boat Deck to Inspect the Infectious Hospital through the Open Door. GGA Image ID # 14764387cc The Emigration Officer Hard At It with the Ship's Fire Brigade. GGA Image ID # 1476472daf

Leaving the emigration officer hard at it with the fire brigade, we may accompany the medical officer to the ship's dispensary, where he sees that everything requisite is at hand and of good quality. Then to the boat-deck, where the infectious hospital is located.

When the medical officer is satisfied with these departments, he is free to make his final inspection of the emigrants 'quarters and everything in connection with this part of the vessel. Then he is ready to examine the emigrants as they come on board. Passengers Embarking onto a Large Tender to be Taken out to the Ship. GGA Image ID # 147654f5b2

As the circumstances of the tide permit, the passengers are either embarked direct from special trains in the docks or are taken out to the vessel in the stream. The flow of emigration to Australia is increasing rapidly, and large batches of agriculturists and domestics leave by every boat.

This is due to the fact that there is great demand at good wages for people of these classes, and the Governments of New South Wales, West Australia and Queensland have embarked on a vigorous and liberal policy of assisted passages, respectable young agriculturists being able to travel to New South Wales for £6, and domestics for £3, and on arrival they are met and placed in suitable positions by Government officials.

Passengers Board a Large Tender to be Taken Out to the Ship. GGA Image ID # 1476b3dc24

The passengers are taken out in a large tender; at the gangway, the medical officer takes his position and examines each as he or she reaches the deck. Any diseased or physically unfit person would be turned back, but in view of the rigid methods of selection on the score of physical fitness this unpleasant duty is fortunately of rare occurrence. An Inspector Visits the Chart-Room with the Captain to Examine the Record of the Deviation of the Compasses. GGA Image ID # 1476e7384e

When the friends have left for the shore, and the emigration officer has finished all the details of his comprehensive duties and paid a visit to the chart-room with the captain to examine the record of the deviation of the compasses, he hands the clearance papers over, the Channel pilot takes his position, the second officer stands by, and away goes the liner on her 12,000 miles voyage. The Emigration Officer Hands the Clearance Papers Over, The Channel Pilot Takes his Position, While the Second Officer Stands By. GGA Image ID # 14770712c4