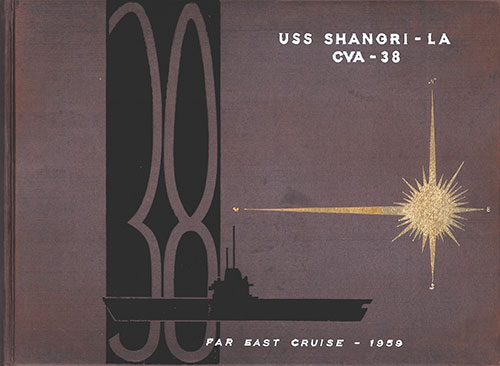 This is the story of one cruise in the history of a proud ship.   It is a  story that covers many thousands of miles and many foreign lands. It is a story of the men who make her a proud ship.

Many people wonder at the name of our ship since most aircraft carriers are named after famous battles. In April of 1942, the USS Hornet launched the famous Doolittle raid on Tokyo. When asked by the press to name the base from which the raid originated, President Roosevelt answered 'Shangri-La', the mythical utopia in James Hilton's novel 'Lost Horizons’. After the Hornet was lost in action, an account of her war record identified her as the 'mystery base’.  The American people decided she needed a successor and in response to a nation-wide sales drive they bought enough War-Bonds to establish 'Shangri-La’ as a reality.

In the Spring of 1945 Shangri-La entered the bitter island campaigns in the Western Pacific. With Carrier Air Group 85 aboard she soon distinguished herself in action and became known as the 'Tokyo Express’, her planes relentlessly striking deep in the heart of the Japanese homeland.

In June of 1947, Shangri-La was placed out of commission with the U. S. Pacific Reserve Fleet. She was re-commissioned in May of 1951 for service with the Atlantic Fleet. In September 1952 she returned to the West Coast for conversion at the Puget Sound Shipyard, where she became the first U. S. carrier to have a canted flight deck and steam catapults. She returned to the fleet in 1955 as the most modern attack carrier then in service. This is her fourth Far East cruise since conversion.

The beginning and end of our story takes place in San Diego. The time is from March to October, 1959. The following pages tell our story and will perhaps better explain the pride we have in our ship. The Captain graduated from the United States Naval Academy, Annapolis, Md., with the class of 1934 and commenced a six year tour of sea duty aboard the USS PENNSYLVANIA, USS DORSEY, USS WHIPPLE and the USS VINCENNES.

In September of 1940 he returned to shore duty at the Naval Air Station, Pensacola, and received his wings from the station in March of the following year. He was sent to Naval Air Station Miami, for a two month stint a> an aviator and then reported to VB-5 aboard the old USS YORKTOWN (CV-5) where he served as Executive Officer.

It was during this time that the Captain won the Navy Cross and Distinguished Flying Cross for actions performed during the Battle of the Coral Sea and the New Guinea Raid in the spring of 1942, while in the Pacific.

In September of 1950, he began a tour with the staffs of ComCarDivFOUR as Operations Officer and ComOpDevFor as Air Officer, which eventually lead him to the Naval War College.

In Autumn of 1955, he reported to the Staff, ComSECONDFIt as Plans Officer. A year later he received his first surface command at sea aboard the USS PINE ISLAND (AV-12). He relieved CAPT Short aboard SHANGRI-LA September 13, while the ship was patrolling the waters just south of Formosa during the Quemoy crisis. Captain Preston enlisted in the Navy in 1930 and served aboard the USS LEXINGTON as a Radioman before passing the examination for entrance to the U. S. Naval Academy in April, 1932. Upon graduation from the academy in 1936 he reported aboard the USS OMAHA and later the USS MEMPHIS before being assigned to the Naval Air Station at Pensacola, Florida for flight training. While serving aboard the USS YORKTOWN during World War II, he participated in the battle of the Coral Sea and later, the battle of Midway in which he received a slight wound.

Upon completion of the Advanced Course in Naval Warfare, he served two years with the office of Chief of Naval Operations as Head, Naval Warfare Plans. Captain Lamb assumed his duties aboard SHANGRI-LA, April 4, 1958, in Pearl Harbor prior to SHANGRI-LA's departure for the Western Pacific. His previous duty station was at the U. S. Naval Academy where he served as Executive Officer of the Aviation Department.

The Captain's career started with his graduation from the Naval Academy in 1940, when he served aboard the USS BROOKLYN prior to entering flight training in 1942. In October, 1943, he reported aboard USS PRINCETON as Executive Officer of VF-29, flying the Grumman F6F. While aboard the PRINCETON he participated in the initial strikes on the Marianas Islands and the Philippines. During a mission over Manila, Captain Lamb was shot down and subsequently spent two months with the Philippine guerrillas before his rescue by submarine.

He then reported aboard the USS LANGLEY (CVL-27) as skipper of VF-51. Following World War II, he stayed aboard the LANGLEY as Navigator and Air Officer. Other duty stations the Captain served with were, VF-52, COMNAVAIRPAC, Armed Forces Staff College, BUAER, and on the staff of the Commander Air Eastern Atlantic and Mediterranean. Captain Lamb is the holder of the Navy Cross and the Air medal, among other awards.

Captain Lamb was relieved as Executive Officer aboard SHANGRI-LA on July 16, 1959, by Commander Crockett, and proceeded to his new duty assignment at the Naval Academy, Annapolis, Md. CDR David Crockett, who reported aboard in early Moy and assumed the duties of Operations Officer, relieved CAPT W. E. Lamb, July 16, as SHANGRUA's Executive Officer while the ship was at Yokosuka, Japan.

CDR Crockett, o native of Dallas, Texas, and a 1939 graduate of the University of Texas, has served aboard carriers for a number of years. His service was spent mostly in the USS BOXER, USS YORKTOWN, USS BENNINGTON, and recently aboard the USS TICONDEROGA.

He reported aboard SHANGRI-LA from the TICONDEROGA where he served as Air Group Commander for 26 months. Other highlights in his career include a tour as Commanding Officer of Fighter Squadron 64, Commanding Officer of the Fleet Air Gunnery Unit, El Centro, Calif., and as Bureau of Aeronautics representative at North American Aircraft, where he tested and purchased new aircraft for the Navy and the Air Force, notably FJ-4's and F-100's.

CDR Crockett has also had tours as Executive Officer of Fighter Squadron 191, and Operations Officer of Air Group 19. The morning of 9 March was greeted with mixed emotions as the last tender goodbyes were said, the last line aboard, the last wave to someone special on the dock. Some looking forward to the ports we would visit, some wishing the ship to tie up again to Quay Wall and forget about the whole thing. While distinguished guests and crew members gathered around a simulated platform on the ship's flight deck, both Captains gave addresses followed by the reading of their respective orders.

Captain Preston thus became the sixth skipper of SHANGRI-LA since her recommissioning in January 1955.