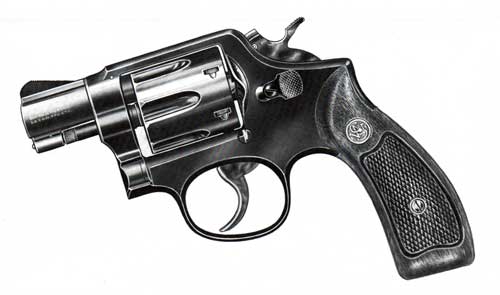 This gun is classified as a FIREARM or DANGEROUS WEAPON and is surrendered by us with the express understanding that we assume no liability for its re-sale or safe handling under local laws and regulations. Smith & Wesson assumes no responsibility for physical injury or property damage resulting from either intentional or accidental discharge, or for the function of any gun subjected to influences beyond their control, and will honor no claims which may result from careless handling, unauthorized adjustments, defective or improper ammunition, corrosion or neglect.

For your protection, examine your gun carefully at the time of purchase, then fill out and mail to us promptly the registration card bearing your gun's serial number which accompanies all new guns.

The company will replace or adjust to its commercial standard any gun or part thereof returned prepaid to the factory and found by us to be defective in either material or workmanship. Such service will be made free of charge for one year from date of registered purchase. This warranty and statement df liability supersedes all previous warranties and commitments.

SMITH & WESSON WILL REFINISH HANDGUNS OF ITS OWN MANUFACTURE AT THE FOLLOWING PRICES: Refinishing - either blue or nickel - $12.85. Change of finish - $16.60. No change of finish is offered on the Victory or Airweight models or on the Models 28, 39 or 60. The time requirement is usually less than 30 days, and if repairs are necessary the cost of parts would be in addition to the above figures.

Should your Smith & Wesson revolver require adjustment, repair or refinishing, we recommend most sincerely that the weapon be returned to the factory. There is no other way to insure that the work will be done in a properly equipped and staffed shop.

Charges are very reasonable, being based on the cost of parts replaced plus a labor charge for the time expended on the job. A labor charge for one hour is usually sufficient to cover all but very extensive overhaul jobs.

Revolvers returned to the factory should be MARKED FOR THE ATTENTION OF THE SERVICE DEPARTMENT. A letter of instructions should be enclosed with the gun, and shipment by individuals must be made by Prepaid Railway Express. Adherence to these suggestions will prevent loss of time in handling at the factory.

When returning guns for service, please remove custom stocks and holsters. We cannot assume responsibility for these items.

When your revolver arrives in our Service Department, it will be very carefully inspected, together with your letter of instructions. Next, a quotation covering total cost of work to be performed will be sent to you. No actual work will be commenced before receiving your approval of our quotation unless you specifically authorize us to do so.

Many weapons require stripping or at least partial disassembly in order to clean and oil them properly. This does not apply to the revolver, which may be cleaned and lubricated under all normal circumstances without removing a single pin or screw.

If at any time disassembly of the weapon is indicated for repairs, etc. it is recommended that the gun be returned to the factory, or you should at least employ the services of a qualified gunsmith.

To keep revolvers in proper condition, and to insure perfect functioning in time of need, it is essential that they be kept clean and coated with a rust inhibiting oil. Care is required to prevent rust, especially in damp, humid climates, or when sweaty hands come in contact with the guns.

To clean the revolver as required when the weapon is not fired, or when kept in storage, rub it externally with a lightly oiled cloth, and then swab out the bore and cylinder chambers with an oily flannel patch. Remove excess oil but leave a light film to protect the arm against rusting. Clean out all crevices with a small clean brush.

For cleaning after firing, scrub out the bore and chambers with an approved nitro solvent, and then use a brush dipped in solvent to remove all deposits from around the breech of the barrel, extractor head, and other adjacent areas which have been subjected to the action of powder or primer residue. If there is any evidence of lead particles, or other foreign matter left in bore or chambers, it is well to scrub these parts further with a bronze or brass brush dipped in powder solvent.

After cleaning off the entire gun with nitro or powder solvent, remove all traces of the solvent, both on the exterior of the gun and in the bore and chambers, following immediately thereafter with the application of a light film of oil. Note that there is usually some residue in the steel of both barrel and cylinder that works out and becomes apparent within from 24 hours to 48 hours after the initial cleaning. This can be removed with a bristle brush with perhaps a light re-application of powder solvent, after which the oil film should be re-established on all surfaces.

Do not store revolvers with a plug in the barrel, since this is a contributing factor to sweating. By the same token, maintenance or storage rooms should be kept at a constant temperature with the least possible humidity, and the guns should not be stored encased in anything which will attract or hold moisture, such as leather.

If revolvers are to be stored for a long period of time, the internal mechanism of the lockwork should be heavily oiled with an acid free lubricating oil, and the exterior of the guns, as well as the bore of the barrel and the charge holes of the cylinder, should be heavily coated with an anti-rust oil. It is an established fact that moisture is the greatest enemy of metallic objects, particularly in climates where temperature and humidity are high, and salt air is present.

Extreme care should be exercised that all metallic surfaces be kept clean and oiled, and the wood stocks on the revolvers should be inspected for cracks caused by moisture. A periodical coat of raw linseed oil, well rubbed in with the hand, will help to prevent the splitting of stocks, but care must be exercised that the linseed oil does not get into the mechanism or on moving parts, as it has a tendency to gum when dry.

The Smith & Wesson 38 Military & Police Air-weight revolver is a 6-shot breech-loading hand weapon. It is produced with a solid frame and a swing-out type of cylinder, having 6 chambers around a central axis so that 6 shots may be fired before reloading is necessary. The weapon may be fired either single action or double action, and cocking the hammer by either method causes the cylinder to rotate and align the next chamber with the barrel. The rate of fire is limited only by the dexterity of the operator in reloading the cylinder and his ability to aim the weapon and pull the trigger. Loading and firing this revolver is a comparatively simple operation, as follows:

Push the thumbpiece forward. This will release the cylinder so that it may be swung out to the left side for loading. Holding the gun so that the cylinder is in its outermost position, and with the muzzle pointing downward, insert cartridges in the charge holes making certain that they are firmly seated. Return the cylinder to its original position in the frame, pressing it firmly into place to make sure that it locks in alignment. The gun is now ready to fire.

There is time even in rapid fire shooting for the deliberate handling of the gun in single action fashion just so long as the function is performed without loss of time and in a definite cadence whereby the cycle will be completed within the allocated time.

Where time or other circumstances do not allow for single action fire the revolver is used double action. To fire double action all that is necessary is to align the weapon with the object which you wish to hit and pull the trigger firmly all of the way to the rear. This will cause the hammer to rise to its full cocked position and then fall to explode the cartridge, and as previously stated the only limit to the speed with which a weapon can be manipulated in this fashion will be determined by the dexterity of the shooter. This type of shooting is required in combat work or under emergency conditions where the gun must be used with great speed.

Before proceeding to use this weapon, a word of caution is in order. This gun is as safe to handle and use as we can make it, but there is no foolproof firearm. Used correctly by a competent person the revolver is one of the safest handguns. There are many safety rules but those found below are basic, and should be observed rigidly until they become second nature.