1972 A De Fever Passagemaker 38 in the Bahamas Out Islands Foot for foot, one of the biggest little ships we've seen yet is the De Fever Offshore 38 which contains a prodigious amount of livability and stowage space in just 38 Feet. After 9 years as a boatyard owner, I bought myself a Passagemaker 40 Trawler - a top performing and dependable cruising boat. 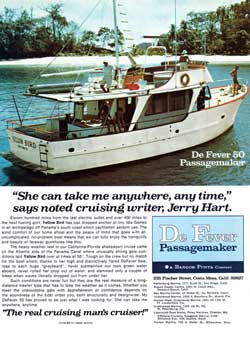 De Fever 50 Passagemaker Takes Jerry Hart Anywhere, Any Time with the solid comfort of our home afloat and the peace of mind that goes with an uncomplicated, no-problem boat. Passagemaker 40, designed by Arthur De Fever and Built by Jensen Marine in America is an all fiberglass offshore cruising trawler. 1973 A De Fever Passagemaker 40 in the Bahamas Out Islands

The De Fever Passagemaker 40 is the best offshore diesel cruiser you can buy at any price. It is a long-range diesel trawler that fits your needs. It takes a naval architect of the stature of Arthur De Fever and the years of experience and know-how of Jensen Marine to bring you a true sea-going ship like this Passagemaker 34. 1974 Passagemaker 34: The All American, All Fiberglass Offshore Trawler

De Fever Passagemaker 34 is an all-fiberglass, ocean-crossing sailboat and offshore trawler that cruises the world with safety, economy, and trouble-free reliability. Thanks to the genius of our designer, Naval Architect Arthur De Fever, the Passagemaker 40 gives you more usable living accommodations than our competitor's 42 footer.