Steerage Passengers on the Deck of an Ocean Liner circa Early 1900s. Photograph from a Postcard. GGA Image ID # 154782ffc3

On steamships, Steerage (or Tween Decks) and Third Class was the default choice of many immigrants from the 1850s through the 1930s. The conditions varied by steamship line and were likely to be relatively harsh compared to modern standards.

The expression "steerage passenger" means all passengers except cabin passengers, and persons shall not be deemed cabin passengers unless the space allotted to their exclusive use is in the proportion of at least thirty-six clear superficial feet to each passenger.

Early steerage often housed hundreds of immigrants in one large room, often converted from cargo holds to hold what might have been described as human cattle. These potential new citizens were emigrants from many countries around the world who endured a journey unlike any other.

Westbound versus Eastbound Voyages in Steerage

The steerage from Liverpool to New York is one thing, the steerage from New York to Liverpool another. It is on the first-named voyage that one sees the wretched creatures huddling in groups like animals, shivering in abject terror at the motion of the water, croaking hoarsely in the obscure patois of remote European villages, and mumbling prayers at impromptu shrines.

Superb examples of actual steerage passage contracts, passage tickets, and Agent's receipts for steerage passengers aid in the study of immigration, genealogy document identification, and discussions of the hardships encountered by immigrants. The Steerage Passenger collected several documents on their way to the new world. Inspection Cards for Immigrants and Steerage Passengers were provided to steerage passengers and retained for identification during their journey to their final destination. Immigrant Inspection Card for an Immigrant's Voyage on the RMS Carpathia of the Cunard Line, Departing from Liverpool on 18 October 1904. The Carpathia Would Become Famous in 1912, Coming to the Rescue of the RMS Titanic. GGA Image ID # 1d56ae9e7e

Steerage souvenir passenger lists are exceedingly rare. With few exceptions, steamship lines did not produce passenger lists for steerage passengers. One could state the top two reasons as 1) immigrants were unlikely to be regular customers in future voyages of the steamship line, and 2) there wasn't any demand for a souvenir of a journey that was likely far less pleasant. Curated Photographs Documenting the Life and Conditions in the Steerage (Between Decks) Experienced by Many Immigrants Traveling to the New World During the Nineteenth and Early Twentieth Centuries. Students and Family Historians Are Welcome To Use These Photographs To Illustrate Their Reports and Family History Books. In company with about forty other Steerage-passengers, the writer embarked at Liverpool on the 28th of March 1832, and on the 4th of May following landed at New York. The first week after leaving Liverpool we made but little progress, being detained by contrary winds; but upon the whole it was called a favorable voyage.

Journey In Steerage from Northern Europe - 1871

Various steamship lines are enumerated; with details concerning their management as far as steerage passengers, that is, emigrants, are concerned. The article includes information on Ports of Call and Rates Charged for Steerage.

As the object of this inquiry is not immediately connected with the physical condition of emigrants on embarkation, but with accommodation given, and treatment received.

A British reporter takes a voyage on the Cunard Steamship Line in steerage and reports on the horrible conditions endured by immigrants.

In the steerage, where the heaving is greatest-that part of the ship often rises out of the water and, of course, goes down again-sickness is prevalent; yet children recover from sickness much sooner than their parents.

The United States Passenger Act of 1882

The passenger act, before referred to, affords protection to passengers against overcrowding, makes it obligatory to give them proper and sufficient food, air space, and in many respects promotes their comfort and safety.

Crossing the Atlantic in Steerage - 1884

The following racy (sic) sketch of the experiences of a steerage passenger (belonging to Montrose), in crossing the Atlantic in an Ocean Liner, will be of interest to many of our readers.

The Sham Immigrant Journey in Steerage - 1888

As a record of conditions already dead as the dodo, this honest account of a voyage from Liverpool to New 'York in 1888 is worthy of preservation in more convenient and enduring form than that in which it first appeared.

Dinner in the Steerage of a Transatlantic Steamship - 1890

First-class passengers, accustomed to the excellent food of their cabin table, often speak of the pleasing odors arising from the cook's galley, where the ragouts and the "haricot de mouton" (mutton beans) for the steerage are prepared.

Bunking in with the Emigrants -- Uninviting Surroundings -- Some of the Noises, Smells, and Other Discomforts the Steerage Affords. These are the conditions found in 1890. The vast majority of immigrants to North America arrived via steerage.

Steamship companies often used such flyers to notify agents of rate changes or announce certain classes of passengers for a fully booked voyage. This White Star Line flyer, from April 1892, informed agents that they had fully booked the upcoming voyage in the steerage class.

Life in the Steerage on the RMS Campania - 1895

The arrangements for steerage passengers on one of the best ocean steamers, the Campania, are as follows. The steerage quarters, situated on the lower deck, are divided into seven different sleeping apartments for some 700 or 800 passengers.

The lavishly illustrated article provides a historical account of what a transatlantic voyage in steerage was like for the immigrants.

Every American citizen knows that the American immigration system is faulty. He knows that the designing steamship officials dump the world's refuse on our shores, despite futile restrictions and laws too easy to evade.

The Fellowship of the Steerage - 1905

The embarkation day finds an excited crowd with heavy packs and heavier hearts climbing the gangplank. An uncivil crew directs the bewildered travelers to their quarters, which in the older ships are far too inadequate, and in the newer ships are, if anything, worse.

It seems improbable that the fare of steerage passengers forced to sleep in the dining rooms in full view of the entire ship is necessary for the profitable running of the ship.

Improvements in Conditions in Steerage Class and Increased Head Tax - 1907

With the improvement in steerage, which has taken place within the last few years, many companies have dropped the name steerage and now designate it as the "third class."

Section 42 of the new Immigration Act increased by nearly 25 percent the minimum space allowed for each steerage passenger on ocean steamers coming from Europe, Asia, Africa, Australia, and South America after 1 January 1909. 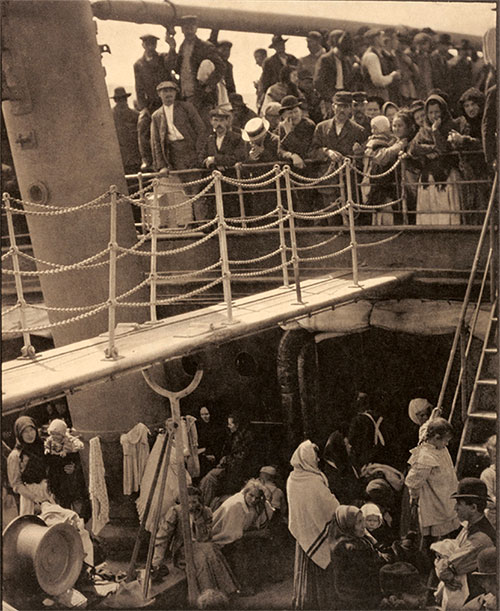 The Steerage: A Photograph by Alfred Stieglitz - 1907

In 1907 Alfred Stieglitz, in the most famous photograph (above) under the title "The Steerage," verified that Stieglitz comprises the history of photography in the United States.

Currently, the treatment of men, women, and children in the steerage of certain ships from German, Mediterranean, and Adriatic ports is far below this standard. This is a first-hand account of the conditions of steerage as of 1906.

Section 42 of the new immigration law was approved on February 20,1907, the purpose of which is to provide greater air space and better accommodations for immigrants. Section 42 does not take effect till January 1, 1909.

Treatment of Women in Steerage - 1909

The vile language of the men, screams of the women defending themselves, crying of children, wretched because of their surroundings, and practically every sound that reached the ears irritated beyond endurance were experienced in the Steerage.

London Agents Call the U. S. Commission's Findings "Absurd" and "False." DENY MISTREATING ALIENS. The Immigration Commissioner Here Thinks Some of the Charges May Be Exaggerated.

Abuses Among Immigrant Passengers in Steerage - 1910

Abuses among immigrant passengers who come to this country through the ports of New York, Philadelphia, and Baltimore, have recently been the subject of a "silent" inspection by immigrant officers connected with the department of commerce and labor.

The expansive report from the Immigration Commission provides an excellent summary of the conditions and history of steerage based on information obtained by special agents of the Commission traveling as steerage passengers on 12 different transatlantic steamers.

Changes to Steerage Conditions on Steamships - 1912

Emigrants who came to America in sailing vessels previous to the sixties of the last century can never forget the steerage conditions under which they came.

Among her 1,242 steerage passengers, in the eight weeks of her voyage, 58 deaths, 57 were children; the births numbered 14. Fines were levied against the steamship owners.

It is doubtful if, anywhere else in the entire civilized world can, such vile, disgraceful treatment of human beings in masses as on most of the steamships which carry our immigrants to us.

The Cotterill Report on Steerage Conditions - 1913

Ernest C. Cotterill Reports on the Bad State of Affairs Among the Immigrants on Some Ships and Offers Recommendations for Improvement of Conditions at the time of the Titanic.

A Steerage Experience for Five Dollars - 1922

"There was keen competition at this time." Said Mr. Williams, "and I have known steerage passage to America to be given for a single sovereign — five dollars."