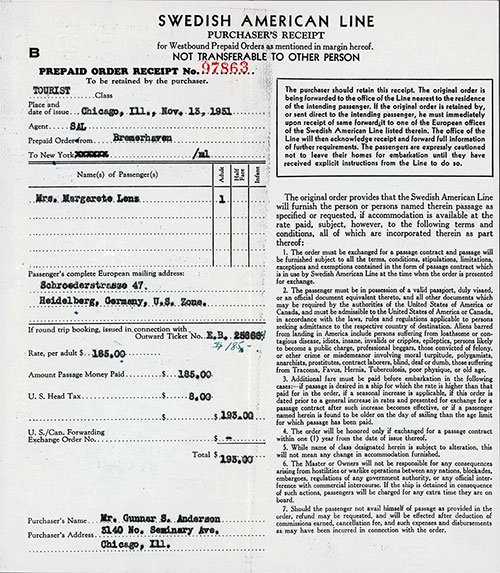 Prepaid Tourist Class Passage Ticket dated 13 November 1951 for German Immigrant, Departing from Bremerhaven on 24 February 1952 and arriving in New York on 6 March 1962 on the MS Gripsholm of the Swedish American Line. Toral Fare was $193.00 Including $8 Head Tax.

SWEDISH AMERICAN LINE
PURCHASER’S RECEIPT for Westbound Prepaid Orders as mentioned in margin hereof. NOT TRANSFERABLE TO OTHER PERSON

The purchaser should retain this receipt. The original order is being forwarded to the office of the Line nearest to the residence of the intending passenger. If the original order is retained by, or sent direct to the intending passenger, he must immediately upon receipt of same forward it to one of the European offices of the Swedish American Line listed therein. The office of the Line will then acknowledge receipt and forward full information of further requirements. The passengers are expressly cautioned not to leave their homes for embarkation until they have received explicit instructions from the Line to do so.

The original order provides that the Swedish American Line will furnish the person or persons named therein passage as specified or requested, if accommodation is available at the rate paid, subject, however, to the following terms and conditions, all of which are incorporated therein as part thereof:

A simple Purchasing Power Calculator would say the relative value is $1,920.00. This answer is obtained by multiplying $193 by the percentage increase in the CPI from 1951 to 2020.