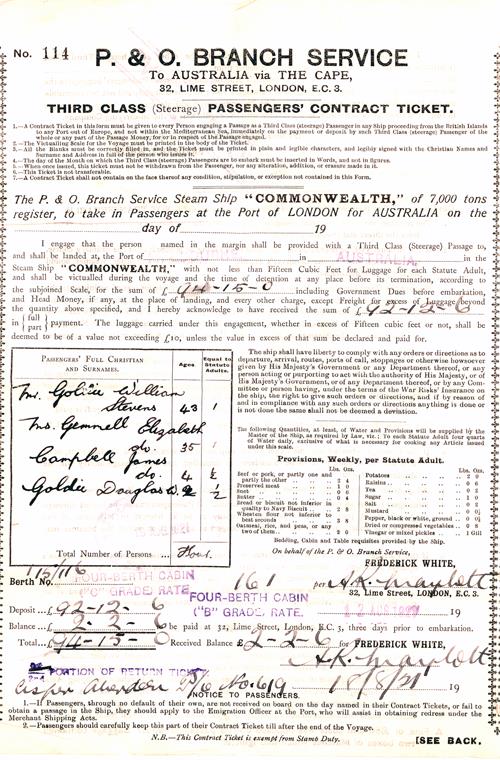 Third Class (Steerage) Passengers' Contract Ticket for The Stevens Family of Four sailing on the P. & O. Line SS Commonwealth from the Port of London to Melbourne, Australia dated 18 August 1921. From the Bill Stevens Collection.

1.—A Contract Ticket in this form must be given to every Person engaging a Passage as a Third Class (steerage) Passenger in any Ship proceeding from the British Islands to any Port out of Europe, and not within the Mediterranean Sea, immediately on the payment or deposit by such Third Class (steerage) Passenger of the whole or any part of the Passage Money,- for or- in respect of the Passage engaged.

2. —The Victualling Scale for the Voyage must be printed in the body of the Ticket.

3.—All the Blanks must be correctly filled in, and the Ticket must be printed in plain and legible characters, and legibly signed with the Christian Names and Surname and Address in foolproof the person who issues it.

4.—The day of the Month on which the Third Class (steerage) Passengers are to embark must be inserted in Words, and not in figures.

5.--When once issued, this ticket must not be withdrawn from the Passenger, nor any alteration, addition, or erasure made in it.

6.—This Ticket is not transferable.

7.—A Contract Ticket shall not contain on the face thereof any condition, stipulation, or exception not contained in this Form.

The P. & 0. Branch Service Steam Ship "COMMONWEALTH," of 7,000 tons register, to take in Passengers at the Port of LONDON for AUSTRALIA on the day of 19, engage that the person named in the margin shall be provided with a Third Class (Steerage) Passage to, and shall be landed at, the Port of MELBOURNE in AUSTRALIA in the Steam Ship "COMMONWEALTH" with not less than Fifteen Cubic Feet for Luggage for each Statute Adult, and shall be victualled during the voyage and the time of detention at any place before its termination, according to the subjoined Scale, for the sum of £ 94-15-0 including Government Dues before embarkation, and Head Money, if any, at the place of landing, and every other charge, except Freight, for excess of Luggage beyond the quantity above specified, and I hereby acknowledge to have received the some of £ 92-12-6 in full / part payment. The luggage carried under this engagement, whether in excess of Fifteen cubic feet or not, shall be deemed to be of a value not exceeding £10, unless the value in excess of that sum be declared and paid for.

The ship shall have liberty to comply with any orders or directions as to departure, arrival, routes, ports of call, stoppages or otherwise howsoever given by His Majesty's Government or any Department thereof, or any person acting or purporting to act with the authority of His Majesty, or of His Majesty's Government, or of any Department thereof, or by any Committee or person having, under the terms of the War Risks' Insurance on the ship, the right to give such orders or directions, and if by reason of and in compliance with any such orders or directions anything is done or is not done the same shall not be deemed a deviation.

The following Quantities, at least, of Water and Provisions will be supplied the Master of the Ship, as required by Law, viz.; To each Statute Adult four quarts of Water daily, exclusive of what is necessary for cooking any Article issued under this scale.

Bedding, Cabin and Table requisites provided by the Ship.

1.-If Passengers, through no default of their own, are not received on board on the day named in their Contract Tickets, or fail to obtain a passage in the Ship, they should apply to the Emigration Officer at the Port, who will assist in obtaining redress under the Merchant Shipping Acts.

2.—Passengers should carefully keep this part of their Contract Ticket till after the end of the Voyage.

A simple Purchasing Power Calculator would say the relative value is £4,298.00. This answer is obtained by multiplying £94.75 by the percentage increase in the RPI from 1921 to 2020.

The best measure of the relative value over time depends on if you are interested in comparing the cost or value of a Commodity, Income or Wealth, or a Project . For more discussion on how to pick the best measure, consult the Tutorials.