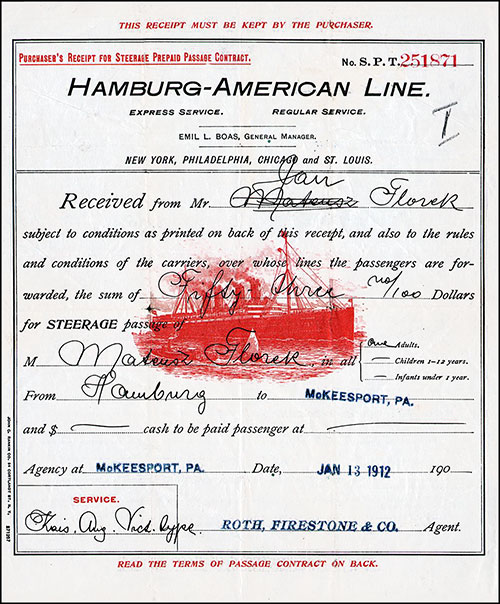 Receipt for the Purchase of a Steamship Ticket and Passage From Hamburg to New York via the Hamburg America Line With Inland Passage to Mcfreesport, Pennsylvania Dated 13 January 1913. GGA Image ID # 1d596ad0bd

This Receipt Must Be Kept By The Purchaser.

Received from Mr. Jan Florek (Note 1) subject to conditions as printed on back of this receipt, and also to the rules and conditions of the carriers, over whose lines the passengers are forwarded, the sum of Fifty-Three and no/100 Dollars for STEERAGE passage of Matthäus Florek in all, One Adult, From Hamburg to McKeesport, PA. The following terms are agreed to by the Purchaser of this Prepaid Passage and by the Passenger, as part of this Contract:

Record of Passage to America under this Contract

Information about Purchaser of Steerage Passage

A simple Purchasing Power Calculator would say the relative value is $1,460.00. This answer is obtained by multiplying $53 by the percentage increase in the CPI from 1912 to 2020.